Monday, 04 June 2018
Putin and crown Prince of Abu Dhabi signed a Declaration on strategic partnership.
Countries called for the establishment of a broad international coalition to combat terrorism based on respect for the sovereignty of States. 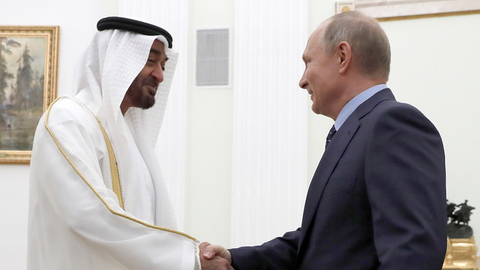 The President of Russia Vladimir Putin and crown Prince of Abu Dhabi Mohammed bin Zayed al Nahyan signed the Declaration on strategic partnership of Russia and the United Arab Emirates. The document was signed following the talks, Putin and al Nahyan, held in the Kremlin.

Earlier, the Russian leader, opening the meeting with al Nahyan, stressed a significant role of this document. "It will be another good step in strengthening our bilateral relations," he stressed.

The countries agreed to increase supplies of agricultural products and foodstuffs, as well as mutual investment in agribusiness.

"The parties confirm their commitment to further cooperation in other areas, in particular <...> in the field of agriculture, food and water security, including increasing the volume of mutual deliveries of agricultural products and foodstuffs, exchange of experience, knowledge and technologies, promotion of mutual investments in joint agricultural and water projects", - the document says.

Earlier, the Ministry of agriculture of the Russian Federation stated the need to expand export markets to the domestic supply of agricultural products, increasing the volume of supply in priority areas - in Asia and the middle East. In 2017, the Russian exporters of livestock products have received access to the UAE market. In addition, Russia supplies in UAE grain.