Tuesday, 12 February 2019
The bakery on "far hectare" built entrepreneur of Primorye
The businessman from Primorski Krai Andrey A. S. shaplov found an unusual use for his "far Eastern acres": in the taiga, he built a bakery, and according to old recipes bakes bread out there. 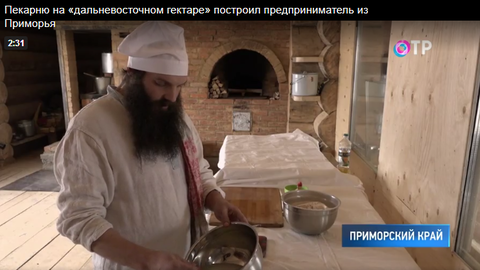 In his opinion, in conditions where "there is clean air and no cell service", the bread turns out "alive". However, it is not cheap. With details the correspondent OTR Maxim Godun.

Oven — around the head. How well it will protopets — so tasty and soft bread, says Builder Paul Pechkin. To build a fire, to warm up evenly the furnace is a science. Haste in this case is not needed. In this bakery do not hurry love. Doing everything thoroughly, manually — just as hundreds of years ago in Russia.

Paul Pechkin, setter: "No chemicals. It's a real honey from the apiary. Real produced national method, Sol. Well water. Whole wheat flour, made from wheat, is also grown without the use of chemicals".

Without the "chemistry" of bread is slow — dough in a large pan suitable for eight hours. Later, in forms for about an hour.

If the bread is, as they say here, "late", does not rise, it will patiently wait. Everything from mixing to finished loaves is at least half a day. At one time in a huge furnace load of up to 120 workpieces.

Plant for the production of traditional Russian bread entrepreneur Andrey A. S. shaplov opened on its "far hectare". Chose a site away from civilization.

Andrey A. S. shaplov, the owner of the bakery: "This place is clean, far from the road is. No cars here. Here even the mobile no. Clean water, clean air, nature, silence. This is basically what I needed".

On the site, Andrew built a real Russian izba, in which was placed the bakery, and bathhouse, coop, mill, dug the well. Says, only in such natural conditions, the bread turns out "alive".

— What a handsome man. Mmm, and the smell!

Its eco-grain is not cheap. To bring the goods from the remote taiga in the capital of Primorye, has to bear the serious costs, due to which its price increases to two hundred and even three hundred roubles for a loaf. But the demand is there — all their products A. S. shaplov successfully sells on the Internet. And now is preparing to open two brand bread shops in Vladivostok and Nakhodka.

Последние новости
11:01 Ended in Berlin "Green Week-2020"
10:04 Weekly market review sugar
09:06 Scientists of the Crimean Federal University have found a way to speed up production of essential oils
08:09 Holding company "Novotrans" increasing transportation of products of metallurgical enterprises
17:01 Program, new speakers, participants and sponsors of the International agricultural conference WHERE the MARGIN is 2020
16:08 Russia is preparing for a commemorative participation in the Brussels exhibition
15:41 GC "Yug Rusi" tender: "Supply of workwear and PPE to 2020" for the needs of enterprises of GC "Yug Rusi"
15:36 The large supply of technological equipment in the Kursk region
15:04 The network of hypermarket O ' KAY refuses plastic bags from the primary oil
14:02 AGCO-RM is launching a new leasing program for tractor Massey Ferguson® 6713
13:03 Rzs: the restriction of grain exports hit farmers
13:00 GC "Yug Rusi" tender: "Supply of two and three-component packing (DOY) in 2020. for the needs of JSC "SWC "Krasnodar".
12:09 The company announces the release of the 5 th tokovogo baler
11:04 The Senator of Council of Federation Sergey Mitin visited the production site of the company "Akva KHOLDING"
10:03 "News": experts predict a rise in prices of meat and milk in Russia
All news