Thursday, 18 April 2019
Russia must preserve capacity to produce agricultural equipment to its exports — Medvedev
Russia needs to maintain the capacity in the production of agricultural machinery for export. This was stated by Prime Minister Dmitry Medvedev during the annual report to the state Duma about government work. 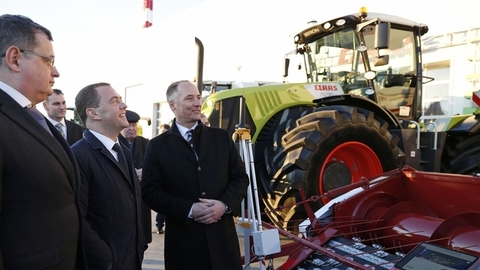 "We have a very special, just very good results in the export of Russian agricultural machinery, who is able to imagine, for example, five to seven years ago. We need to maintain the capacity that we got to make our combines, our tractors were perceived in the world is not worse than similar products that produced such giants as Claas, John Deere," said he.

Medvedev noted that he had discussed the issue of support of manufacturers of agricultural machinery with members of the Communist party. "At the moment we carry out the unification of the work on subsidies, but I can assure you that the result of this work, none of the Russian manufacturers of agricultural machinery have nothing to lose, but rather only to acquire," said he.

The Prime Minister called on producers of agricultural machinery in case of any questions, to subsidize their activities or to go directly to him or to the Ministry. "Nobody would lose", — assured Medvedev.