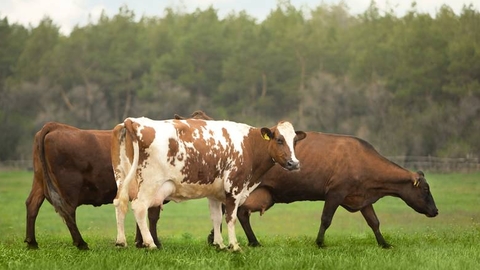 "Starting in 2014, the rise of pedigree breeding stock of farm animals in the 1.8, including the number of cows in 2.7 times. Determined the positive dynamics of acquisition and sale of pedigree cattle. Separately focused on the thorny issue on scope of artificial insemination of cows in the private sector and peasant farms", - said the Minister.

Andrey Ryumshin also noted that livestock breeding plays an important role in the development of agriculture in General. Thanks to government support to date, Crimean farmers receive financial assistance in the form of subsidies and grants, allowing enterprises to develop and acquire breeding stock.

Also, head of the sector for tribal oversight Hope Opalihin focused the attention of the listeners of the event on the relevance of participation in the ongoing regional contests in the Republic and about the upcoming regional contest for the best by profession among the operators of machine milking of cows. The competition will take place in July this year.

Also the event was marked by a large work in formation of normative legal documents for breeding, both at the Federal and at the regional level.

In the meeting took part representatives of State veterinary Committee of the Republic of Crimea, Rosselkhoznadzor of the Republic of Crimea, scientists of the Academy of life and environmental Sciences of the Crimean Federal University. Vernadsky, specialists of the regional information and breeding center, the State budget institution "Crimean informational-Advisory centre of agriculture".