Wednesday, 10 July 2019
Crimean growers threshed one million tons of grain
The Minister of agriculture Andrey Ryumshin on behalf of Crimean agrarians presented to the President of the Republic of Crimea Sergey Aksenov symbolic sheaf and the loaf baked from the flour of the new harvest, reported "Agrovestnik" with reference to regional Ministry of agriculture. 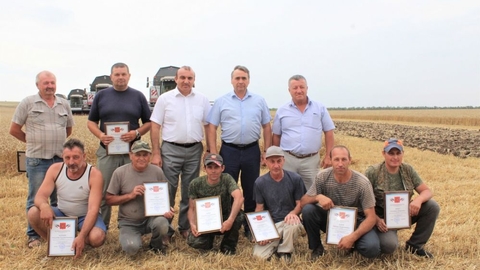 Andrey Ryumshin also thanked Sergei Aksyonov, for a comprehensive state support and commitment to the development of the agroindustrial complex of the Republic.

"The agricultural sector of the Crimea over the past five years has received unprecedented financial support in all areas. Significantly updated Park of agricultural machinery. This year, despite hail impact, we plan to collect a record harvest: not less than 1 million 800 thousand tons of grain and leguminous crops. The harvesting campaign is carried out in accordance with all planned activities," commented the Minister.

Agriculture Minister of Crimea also said that the farmers have to remove more than 40% of the area.

"Our growers work very hard in order to on the tables of the Crimean people were always fresh and delicious bread. Food security farmers are provided 100%, as the demand for wheat in the country for food needs is 260 thousand tons", - said the head of Department.

Andrey Ryumshin also reported that the average yield in the Crimea is more than 30 quintals per hectare.

"If you compare with last year, we managed to raise a total of 906 thousand tons of grain, the average yield in 2018 was almost two times less than 16 kilograms per hectare, which was due to adverse weather conditions: drought. Already defined areas – the leaders of the harvesting campaign, showing the best results as planned and yields. This Alushta, Dzhankoy and Nizhnegorsky areas," the Minister said.

Andrey Ryumshin also visited one of the best agricultural enterprises of the Republic according to the indicators of the harvest.

"LLC "Agricultural company "Zorya" of the Simferopol area is developing at a good pace: we see what's the culture of agriculture, updated the Park of equipment, farmers try to obtain good results, yielding much higher average on the Republic, more than 40 quintals per hectare. The selection of the team from management to machine operators is quite high quality and professional. Today we are proud of such leaders, as Dionysus Alexan", - said Andrey Ryumshin.

The best growers businesses received gratitude from the Minister of agriculture for hard work and high performance in the harvest.

Последние новости
16:00 Weekly review of the sugar market as of April 3,
15:07 Grape hi-tech
14:09 NSA urged its members not to restrict the work of relevant departments and branches of the agricultural insurance
13:07 TESTED AND PROVEN: SENSOR CLAAS NIR SENSOR DETERMINES THE MOISTURE UBRANI MASS WITH LABORATORY ACCURACY
12:02 APH "ECO-culture" — fresh vegetables to support retirees on social security
11:03 One in field – warrior
10:09 BAADER, Marel, PERUZA, "Technological equipment" and "SP-Technology" will take part in the IV Global Forum Fishery & Seafood Expo Russia
09:01 "Baltic leasing": the branches and the head office work online
08:07 JSC "FGC" began to provide services to its own locomotive
17:06 Recommendations for the storage of grain and products of its processing.
16:02 Weekly review of the market of milk and beef for week 13
15:09 GfK study: the Effect COVID-19
14:03 Corteva Agriscience holds a photo contest
13:01 Anti-crisis online conference "See the Possibilities - See the Money"
12:09 HUMIDITY OF GRAIN AND METHODS OF ITS DETERMINATION
All news