Tuesday, 23 July 2019
Row crop planter with electric actuator: quarter of a century in the service of farmers
For more than a quarter of a century Kverneland Group produces row crop planter with electric drive. First presented in 1993 at the exhibition Agritechniсa in Hanover, this invention is subsequently made available to the world selhozzemel advanced technologies of cultivation of tilled crops, as "chess" North. 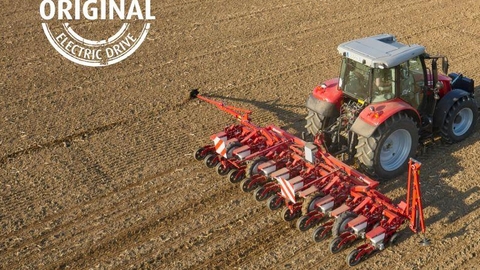 The group Kverneland Group is one of the leaders in production of precision seed drills. For the first time presented at the exhibition in Hanover in 1993 electric Unicorn Synchro became the basis for the modern system of Kverneland e-drive II available on the Monopill and Optima seeding machines. But more importantly, it is this development formed the basis of advanced technologies for sowing row crops. Speech about technologies and GEOCONTROL GEOSEED, the implementation of which became possible only on machines with an electric drive.

The technology GEOCONTROL concludes in automatic disconnect row unit on the basis of satellite signal, and its main advantage is in saving seeds. So, when working on headlands, the system always provides accurate off sections in the same given place, not to handle even the most skilled operator (somewhere he won't dosey meter, somewhere perneet two, etc.). Especially noticeable economic effect will be for sowing "wedges" and fields of complex shape. Customers of Kverneland Group already using the technology say the real savings of up to 5% of the seeds during the sowing campaign.

Even more advanced technology the sowing of row crops – GEOSEED – is gaining momentum in the Russian market. It makes possible the placement of seed on the field in a predetermined manner relative to each other in a square when the seeds are arranged parallel to each other and in a triangle, when the seeds in rows offset relative to adjacent rows by half the distance between seeds in the row. On the basis of agro-climatic conditions in Russia more suitable for the second variant – triangular or, as it like to call the farmers, "chess" crops.

The advantage of using GEOSEED is the yield increase, as due to the optimum distribution of plants on the surface of the field each of them will receive the same feeding area. In addition, when planting the "chess" method of sugar beet during harvesting combine at the same time will unroot only three row and later the next three. Thus, the flow of beets entering the combine, will be more uniform, which has a positive impact on the process of cleaning of root crops from the ground and increase the productivity of the harvester.

At the moment in the Russian market operates more than 1,000 units of Kverneland row crop planters with electric drive, opening domestic farmers access to the latest technologies for sowing row crops. In "Kverneland group CIS", Russian representative office of the concern, for the first time had to use "chess" sowing of sugar beet in one of the major agricultural holdings of the Republic of Tatarstan in 2016. The yield increase was over 13%. In General, farmers have already experienced the technology GEOSEED in their fields, reported a yield increase of 5 to 15% depending on a number of factors. Even at the minimum rate of growth of productivity 5% a year is enough to make this technology fully paid for itself and turned a profit, confident in the Russian representation of the developer.