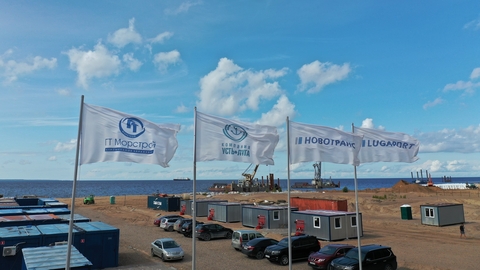 General contractor – Construction management "GT Morstroy - deployed three Maritime stream. In strict accordance with the construction schedule of the complex is performed the piles of shells.

Recall that in late July prepared by ZAO "GT Morstroy" (General designer) design documentation and results of engineering surveys on the object "Artificial land plots for the construction of sea terminals 5-th, 6-th stage of the complex of General cargoes in Ust-Luga" has received the positive conclusion of the FAE "Glavgosexpertiza of Russia". The Federal Agency of Maritime and river transport (Rosmorrechflot) has been issued a building permit.

In the development of 4, 5, 6-th stage of the Complex of General cargo in the commercial seaport of Ust-Luga (Leningrad region) Group of companies "Novotrans" implements the investment project of construction of the Universal trading terminal "Ust-Luga" www.lugaport.com. The project envisages the creation of marine terminals for grain processing, food goods, as well as General and bulk cargo. The total volume of operations planned at the level of 24.3 million tons per year. Investments in the project will amount to 46.5 billion.