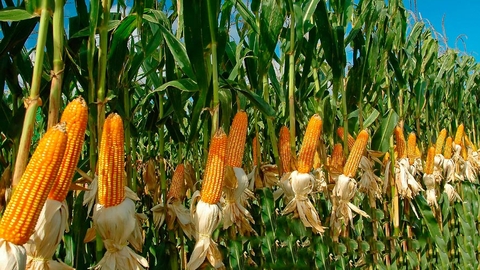 "Agrobiological survey of corn, held on 30 August in the region, showed that depending on the sowing date and biological features of hybrids of different maturity groups continued period of ripening grain. So, when the early sowing dates marked full ripeness, when optimal time – the beginning of full ripeness, when the late stage – wax ripeness of grain. At extra-early sowing time the grain moisture of maize hybrids of various ripeness groups amounted to 30-35%, with the optimal time – 33-37%, while late – 35-39%. The daily reduction in grain moisture over the last week have hybrids of corn amounted to 0,2-0,3%," – said the expert.

It is also noted that to date, the sunflower is in a phase of maturing, and in some fields, early sowing, in harvesting maturity.

In addition, the condition of the soybean crop is good, sometimes satisfactory. Observed plant damage by pests (pod borer). Given the lack of reserves of productive moisture in a meter layer of soil, sometimes there is performed trial cutting soybeans.