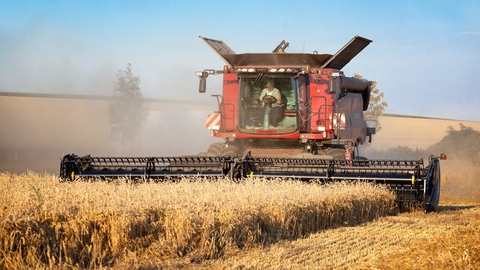 "In the Omsk region farmers over the weekend, the weather was fine, managed to almost clean the entire harvest of the main crops. So, as of 14 October, threshed more than 1.9 million hectares of grain and leguminous crops, or 99.8% of the plan, and produced 3 million 164 thousand tons of grain with a yield of 16.4 C/ha", - stated in the message.

It is completely complete harvesting of grain and leguminous crops in the 30 districts of the 32. The highest yield recorded in Mar'yanivs'ke area of 22.3 centners per hectare, the Ministry said.

Earlier, the head of the regional Ministry of agriculture Nikolay bustard stated that in some areas that were subject to the July drought, the grain shows slightly less quality. Where there is enough moisture, the quality is good.

"(...) Due to waterlogging of soils area this year were planted not in full. The gross yield will be slightly lower than last year," said bustard.

The Governor of the Omsk region Alexander Burkov also said earlier that the region expects to receive this year's harvest of 3.3 million tons of grain.

In 2018, the farmers of Omsk region gathered 3.2 million tons of grain.