Friday, 25 October 2019
In Fatezhsky district of the Kursk region environmental activists found the dump biological waste
In the framework of public ecological monitoring conducted by the activists of the interregional ecological public organization "Green Front" on the territory of Kursk region, revealed a dump of animal waste cattle farm located in the immediate vicinity of the border with S. Sotnikovo Fatezhsky district of the Kursk region. 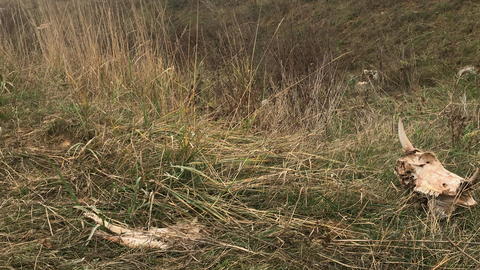 In the ravines, located 100 meters from the pasture of cattle, for dairy farm "the Prestige" environmental activists showed piles of biological waste: animal carcasses, bones, skulls, horns and hoofs, skins.

In addition to animal waste, the ecologists recorded a strong contamination of the soil of household and construction debris, and wood residues.

Due to the fact that the placement of biological waste bulk soil in the vicinity of pastures is not only a serious violation of environmental legislation, but also poses a threat to sanitary-veterinary welfare on the farm, and in connection with General violations of the veterinary legislation in cattle, environmental activists asked the regulatory agencies to expedite the elimination of landfill waste and the biological response against the responsible persons on the farm.