Tuesday, 05 November 2019
Head REC has told to Medvedev about new markets for Russian products
Drivers of Russian exports at the moment are the new industries, such as agriculture and engineering, said the head of Russian export centre (REC) Andrei Slepnev on the meeting with Chairman of RF government Dmitry Medvedev. 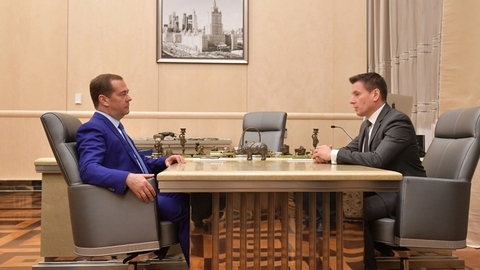 Подписаться на новости
vegoils  oilseeds  World  meat  animal husbandry  fish  Prime-Minister RF  Agri-Produce  Countries  Persons
"Now the dynamics start to set a new industry, especially in the field of agriculture - oil, meat, fish, pastry. Very actively developing engineering - an increase of almost 10%," - said Slepnev.
He noted that the supply of oil coming to the middle East, in Asia, Africa. "As for the fish in the first place is the Asian region. Meat - achieved at the international level agreements, open up China, which is a big trend, where a huge demand.
Pastries go very well around the world. Actively develop our businesses, they have had a taste, felt tools," continued the head of the REC.
"Industrial products: machinery rushed for 10%, 30% increase in deliveries of cars, different components. From Germany customers do visit, ask them to find Russian suppliers, because the ratio of "price - quality" better than the alternatives.
Good - mineral fertilizers, pharmaceutics, cosmetics. Light industry, despite the fact that prices are falling, in physical terms increased by more than 10%", - he added.
Russian manufacturers presented products in Chongqing
Slepnev also reported that the clothes of the Russian designers asking partners on electronic platforms, bought themselves. Formed a list of new industries that now have broken the trend.
"We conclude that our capacity in these markets is relatively new for us, very serious, we clearly underestimated their strength. Entering new markets, product segments now showed its effectiveness. With regard to the work of the REC, for three quarters we supported Russian exports of 14.8 billion dollars is a serious amount, nearly 15% of all shipments - due to the mechanisms of insurance, Finance and promotion. Supported approximately 8.5 thousands of exporters", - said Slepnev.