Monday, 11 November 2019
Pskov MP told how to win Hogweed
The Deputy of the Pskov regional Assembly, head of the novosokol'nicheskiy farm "Red flag" Andrei Kozlov shared his personal experience in the fight against Hogweed Sosnowski. 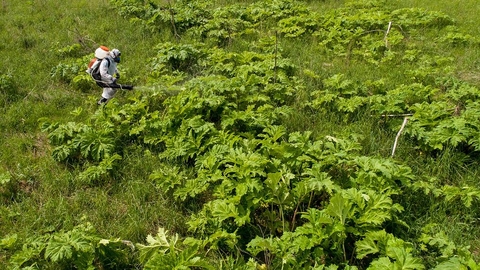 As the press service of the regional Parliament, the MP said that this question "how many scientists, so many opinions".

"Win a cow parsnip in the fields of our farm, we have only mechanical treatment of lands and regular mowing," — said Andrey Kozlov.

The main issue in the Pskov region, in his opinion, is the lack of a "normal contractor".

"The question of who will perform this work in the region. Agricultural producers could do this, but in time when you need to deal with Hogweed, farmers have either the crop or forage, or harvesting. Municipalities have no equipment. There are organizations that could spray Hogweed chemicals, but it does not bring the desired effect," — said the Deputy.

According to the administration of the Pskov region, in the region Hogweed is overgrown more than 20 thousand hectares of land, and only 1.5% of them were processed. Of 5 million rubles allocated from the regional budget to fight the cow parsnip, municipalities spent slightly more than 1 million rubles. One of the reasons of low utilization of funds provided for the regional program, the percentage of co-financing (half of the funds are allocated by region, half of the local budget) for municipalities is too high.

As previously reported IA REGNUM, in the beginning of 2019 the Pskov deputies supported the initiative of deputies of Tatarstan, who proposed to develop and adopt a state programme for the fight against Hogweed Sosnowski. In 2018, the Pskov regional Assembly of deputies was going to take a regional law on combating Hogweed, but further discussion is not gone.

Последние новости
16:02 Equipped with Russian equipment, poultry shop opened in Penza region
15:00 Cherkizovo group took part in the event B20
14:04 Published monthly grain market from January 15
13:08 AGROSILA in 2020 will implement artificial intelligence on a dairy farm
12:04 In the Orenburg region, the farmers will receive for interns 2 million rubles
11:02 Freight report, 3 week 2020
10:03 KRASNODAR PLANT "CLAAS" IS THE MOST EFFECTIVE ENTERPRISE CONCERN CLAAS
09:00 In the Perm region affected by the disaster, insurance payments to farmers for ruined crops 2019 doubled the volume of premiums
08:05 One blow
17:01 JSC FGK for 9% of the increased loading in the gondolas on the Volga railway.d.
16:08 The volume of export deliveries Samara APK in 2019 increased by 53%
15:06 This year on Kuban will lay more than 1.5 hectares of young gardens
14:02 The Ministry of agriculture has developed risk indicators of violations to inspections of field use
13:06 Dmitry Patrushev, the head of the Ministry of agriculture
12:01 Putin signed a new Doctrine of food security
All news