Tuesday, 17 December 2019
OFFICIAL REPRESENTATIVES OF CLAAS IN THE REGIONS CAN BECOME THE SUPPLIERS OF JSC "ROSAGROLEASING"
On December 16 JSC "Rosagroleasing" and OOO CLAAS Vostok signed a cooperation agreement. According to the document, suppliers of JSC "Rosagroleasing", in addition to the LLC CLAAS Vostok, will also become the official representatives of the company CLAAS. This will significantly reduce the time of delivery of equipment to the lessees, the Russian farmers and agri-businesses. 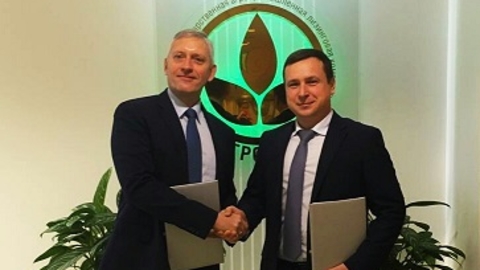 "This year Rosagroleasing has reduced the time for consideration of applications for the purchase of equipment on terms preferential leasing to 8 hours, the period of shipment of equipment – up to 3 days, through a dealer network of manufacturers. Thus, we follow the way of accreditation of dealers and the terms of the delivery of technology in the economy, - said Deputy General Director of JSC "Rosagroleasing" Alexander Suchkov, the agreement will allow the purchase of agricultural machines CLAAS directly from the sites of the dealers of the plant".

"One of the main objectives of CLAAS in Russia, given its vast territory, is creating the same level of availability of equipment in any part of the country, wherever farmers. The agreement with JSC "Rosagroleasing" will allow clients to conclude lease contracts directly with our official representatives in the regions, which will facilitate the registration process and reduce the delivery times of new machines," said Director of sales, marketing and after-sales service of the company CLAAS Vostok Dirk Seelig.

Recall that in the year 2015, OOO CLAAS Vostok signed an agreement on cooperation with JSC "Rosagroleasing". In 2016, the Russian farmers had the opportunity to buy CLAAS combine harvesters TUCANO, produced at the Krasnodar plant "CLAAS", on favorable terms under the program of Federal leasing of agricultural machinery and equipment. From 2016 to 2018, the number of lease contracts of TUCANO combine harvesters has increased more than four times and for 10 months of the current year increase in the number of sold cars was 20%.

CLAAS was founded in 1913 as a family business (www.claas.com), and she is now one of the world's leading manufacturers of agricultural machinery. The company is headquartered in the Westphalian town of Harsewinkel is the European market leader in combine harvesters. Global leadership CLAAS reserves and in the field of self-propelled forage harvesters. Leading positions on the world market of agricultural machinery owned by the company CLAAS in the field of tractors, agricultural balers and forage equipment. The company assortment includes the most modern information technology in the field of agriculture. Today around the world CLAAS has approximately 11,000 employees. Turnover for the year 2018 have to 3.89 billion euros.

In Russia the company works since 1992. In 2003 it started production of combine harvesters in Russia. Currently, the plant in Krasnodar produces seven models of combine harvesters and eight models of tractors. In 2015, open the second phase of the plant. Marketing techniques arranged through the sales company OOO CLAAS Vostok in Moscow with the participation of 19 partner companies, which operate on the territory of Russia.

Последние новости
08:05 Rosselkhozbank said about the profitability of the domestic agricultural sector
17:09 Russia will retain leadership in the world wheat exports
16:00 The Lipetsk region is in the top five for revenue of farm households in the Central Federal district
15:08 The Ministry of agriculture of Russia is ready to allocate to regions additional 2 billion rubles of subsidies for agri-insurance development
14:01 Weekly market review sugar
13:06 Program Asia Grains&Oils Conference expanded due to growing interest in agriculture of Uzbekistan
12:04 Investment in equipment — investment in the result
11:05 Kverneland group Manufacturing Lipetsk: the fifteenth year for Russian farmers
10:00 JSC Federal freight won the all-Russian contest of RSPP
09:00 Company "absolute Insurance" has joined the national Union of agricultural insurers
08:00 Grain exports from Russia in March aktiviziruyutsya and exceed the level of last year - experts
17:01 Bayer creates innovation for agriculture and contributes to sustainable development of the industry through advanced product portfolio and R & d investment
16:03 Preview: in the Chelyabinsk region held a seminar-meeting on issues of insurance selkhozizdat
15:03 The export duty on sunflower seeds may increase by six months
14:07 New piggyback platform Uralvagonzavod JSC "FGC" put into serial production
All news