Thursday, 19 December 2019
"Miratorg" has collected in Pristenskiy district, Kursk region record harvest of grain crops.
– "Miratorg", the largest investor in Russian agriculture reports the harvest of grain crops over 70 quintals per hectare during the press tour for the 10th anniversary activities of the agricultural holding in Pristenskiy area. 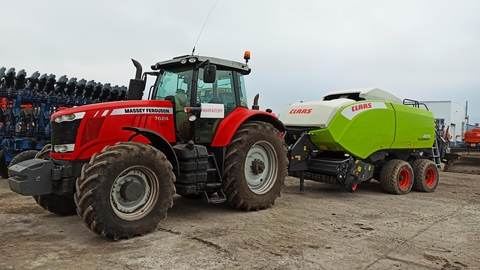 Plant division is a major part of a vertically integrated production chain "Miratorg". This is the basis for the successful development of all divisions of the company - from raw materials obtained from our own farm made feed for large-scale projects for the production of pork, rose veal and lamb. The leader of the agroindustrial sector of the Russian Federation annually gets into circulation thousands of hectares of fallow lands and solves the problem of employment of rural inhabitants, creating high-paying jobs.

"Pristenskiy grain company", part of the structure of agricultural holdings, in the ten years of development in Pristenskiy district has established itself as a reliable manufacturer, and also became the example for many of the agricultural organizations in matters of a competent and careful land use. This year, thanks to the latest high-efficiency technology and advanced precision farming technologies, the company has collected a record harvest grain - more than 70 quintals per hectare. On the territory of the enterprise has the necessary conditions for grain storage capacity of about 100 thousand tons. Currently, we use about 180 units of self-propelled and trailed equipment. The largest employer and taxpayer Pristenskiy district carries out social-oriented policy and focuses on the development of rural areas. The success of the company assessed during the visit, the journalists of the Kursk region, and also the head Pristenskiy district Viktor Petrov.

"With the arrival of the company "Miratorg" in Pristenskiy district, was created about two thousand jobs. This means that 2000 families of our district can get a decent a decent wage, feed their children, to support their families. Also for us it is important that contributions are tax payments to all budgets Pristenskiy district and Kursk region, and Russia," said Viktor Petrov.

"The successful activities of the plant breeding division of the holding company guarantees the stable development of the largest projects of agricultural holdings in the Kursk region. "Pristenskiy grain company" for the past ten years, showing satisfactory growth of all indicators. The company not only provides high-quality and safe food base for livestock development divisions, but also does a great job at improving and maintaining soil fertility. Careful attitude to the native land back to us with record harvests and gives confidence in the future population", - said the press service of the APH "Miratorg".