Thursday, 16 January 2020
APK on Chukotka, increasing the number of reindeer and the production of salmon
Growth rates of reindeer herding and sea mammal hunting in the Chukotka Autonomous district was noted at the meeting of the Minister of agriculture of the Russian Federation Dmitry Patrushev the head of the region Roman Copynum, January 14, the press service of the Ministry of agriculture of the Russian Federation. 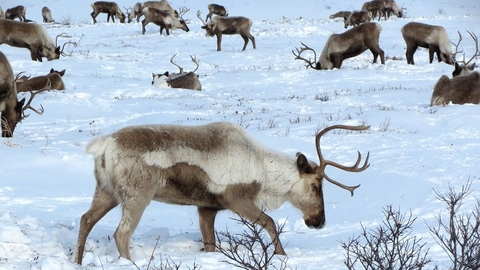 At the meeting of Patrushev with Copynum discussed the issues of development of agro-industrial complex (AIC) North-Eastern region of Russia. The Governor of Chukotka told the Minister about the performance of 2019 in the traditional areas of agribusiness in the region — reindeer herding and marine hunting.

In the past year in the agricultural organizations and peasant farms, an increase in reindeer. The total herd in Chukotka for the first nine months reached 150 thousand heads.

Also increasing the volume of aquatic bioresources caught in 2019, it increased by 41% and reached almost 20 thousand tons. The maximum growth was shown by the production of salmon — 90%. All salmon caught 5,55 thousand tons.

Roman Kopin informed the Minister about the export of agricultural products of Chukotka. The total value of marine biological resources (including fish and shellfish), exported in 2019, amounted to more than $ 12 million.