Friday, 17 January 2020
Pskov oblast and the Russian agricultural Bank has identified the growth points of cooperation
Deputy Chairman of the Board of JSC "Rosselkhozbank" Denis Konstantinov and the Governor of Pskov region Mikhail Vedernikov during a working meeting discussed the possibilities of agricultural development and the prospects for increasing the availability of financial services in the region. 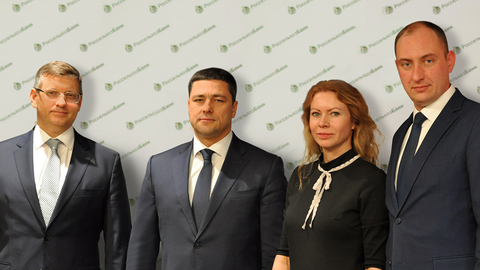 Denis Konstantinov presented the head of the new Director of the Pskov regional branch of Rosselkhozbank Dmitry Alemasov.

"Agrarian and industrial complex of the Pskov region completely satisfy the internal needs of the region for meat, milk and eggs, however, there remains the potential for the development of own production of vegetables. Russian agricultural Bank has a large expertise on this and other areas, and is ready to provide all necessary support of agriculture in the region. Now the market share of agricultural lending in the SME segment by the number of borrowers exceeds 50%, and we appreciate the trust of the farmers. I am sure that Dmitry Medvedev will succeed as Director," said Denis Konstantinov.

"RAB has been working in Pskov region, and has earned the trust of numerous customers. We aim at the comprehensive development of our economy, the social sphere, the plans of many interesting projects, in particular, the need to improve the availability of financial services for the population. I hope that our partnership with Rosselkhozbank will continue and bring more benefits to the residents of Pskov region. I wish Mr President good luck in his new position," said Mikhail Vedernikov.

Dmitry Alemasov came in the banking sector in 2007. Prior to joining RAB he was for more than five years has held management positions in PJSC "Sberbank" and "VTB" where he oversaw the areas of corporate and retail business.

Rosselkhozbank works in the Pskov region in 2006. During this time he was sent to the region's economy more than 30 billion rubles, of which about 20 billion occurred in agriculture.

JSC "Rosselhozbank" is the basis of national credit and financial service system of agroindustrial complex of Russia. The Bank was founded in 2000 and today is a key lender to the agriculture of the country, is among the largest and most stable banks in the country in terms of assets and capital, as well as the leaders of a reliability rating of the largest Russian banks.

Последние новости
11:01 The relevance of grain interventions has decreased due to subsidize transportation
10:09 Kverneland Group introduces on the Russian market a new sprayer
09:04 Rosstat revised data on crop-2019
08:07 May 27-29, 2020, in Moscow on VDNH, pavilion No. 75 will be a specialized exhibition "the Life of a farmer 2020
17:04 Rosselkhozbank said about the profitability of the domestic agricultural sector
16:02 Krasnoyarsk Krai became the first Russian production of rapeseed in 2019
15:03 Representatives of the company "Baltika" has chosen the best graduates of the TSU
15:00 Altai plant began deliveries of agricultural machinery in the Czech Republic
14:05 John Deere and EkoNiva-Tekhnika gave Ryazan agrotechnological University tractor 6125M and display stand SectionCommand
13:31 GC "Yug Rusi" tender: "Supply of led lamps in a quantity of 1559 PCs" for the needs of Branches of LLC "MEZ Yug Rusi" (Branch "MEZ Yug Rusi Rostov", "Laba" "Liskinsky", "valuyskiy", "Chernyanka", JSC "MZHK "Krasnodarsky", JSC "Azov factory of KPA")"
13:01 Corteva Agriscience presented innovative solutions to improve the quality of silage
12:07 The Group of company "Novotrans" was awarded the commemorative badge of Russian Ministry of transport
11:01 The farmers of Siberia in the top five among districts in revenue in the agricultural sector of the Russian Federation
10:09 In Tuva rose the ingredients for pancakes
09:06 MADE FOR THE "KLAAS": BORSKIY THE PLANT WILL START SERIAL PRODUCTION OF GLASSES FOR COMBINE HARVESTERS TUCANO
All news