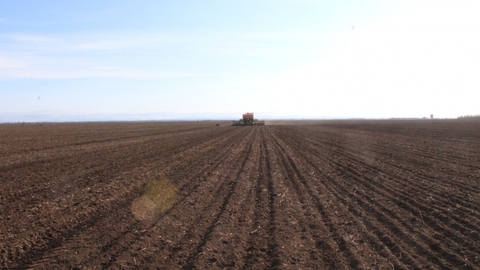 Agrarians of the Crimea began the sowing of spring agricultural crops, reported the Ministry of agriculture of the region. Early grains and legumes is scheduled to take 91 thousand hectares, according to the February 11, planted about 2% of this area or 1.9 thousand hectares, work has begun in eight districts. Last year Crimea began spring planting around the same time.

The Federal Ministry of agriculture on the eve held a meeting on preparation for spring field work. According to approvedate, in 2020 spring needs to hold 52 million hectares, which corresponds to last year's level. Including spring crops it is planned to sow 29.2 million hectares. however, due to the warm winter in some regions of the Russian field work will begin before the average annual terms, draws the attention of the Department.

Winter crops under harvest 2020 was sown on a record 18.3 million hectares, which is 865 thousand hectares more than the previous year. Weather conditions require special attention to monitoring the condition of winter crops and to care for them, said the meeting in the Ministry of agriculture the head of Department Dmitry Patrushev. He also noted that 94% of crops are in good and satisfactory condition, which is better than the mean multiyear values. According to the forecast of the Ministry, the grain harvest this year may reach 125,3 million tons while Industry analysts estimate the potential gross collection above, however, remind you that weather risks persist throughout the entire growing season and harvesting of agricultural products.

Последние новости
14:02 The Ministry of agriculture has proposed to reduce the cost of electricity for farmers to tariffs
13:08 "My Summer" became one of the first Russian companies have received international certificate of GLOBAL GAP
12:03 The fruit yield may be reduced due to frost
11:00 Watch BILLA reserves purchases for customers over 60 years
10:05 The Union of flour millers appealed to the head of the Ministry of agriculture because of rising grain prices
09:00 The exhibition "Agroexposiberia-2020" and Forum "agrarian and industrial complex of Siberia: present and future" will be held in October in Barnaul
08:05 Egg prices will rise
17:07 Training center AGCO-RM in 2019 increased the number of trained specialists 70%
16:06 John Deere improved navigation technology
15:03 THE GROUP UNITS OF CLAAS IN RUSSIA CONTINUE TO WORK AND PROVIDE A FULL RANGE OF SERVICES
14:09 At the IV Global Forum Fishery & Seafood Expo Russia will be extensively represented by a segment of the fishing and fish processing
13:35 The new dates of the exhibition Ecocityexpo Spring 2020 – may 29-30, 2020
13:06 Members of the Association "Rosspetsmash" Russian plants among the leaders in supplies of agricultural machinery on the terms of Federal leasing
12:02 Monthly review of the oil market for March
11:00 Russian plant produced low loader semi-trailer with mechanical ramps for the transportation of road construction machinery
All news