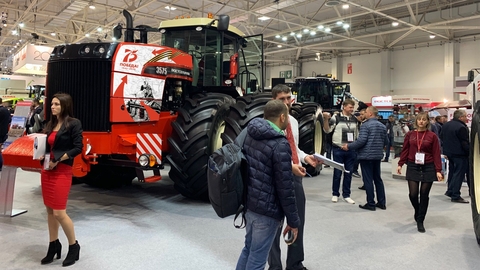 - The great Patriotic war has not spared the company. Already in the first days of the war, hundreds of employees of the company volunteered for the front. On 10 July 1941 was formed of the Rostov shooting regiment of the national militia. Two of his company consisted entirely of rostselmashevtsev. Workers fought in the partisan Mikhail Trifonov (Yugov). Thousands returned from the front with orders and medals. 14 people were awarded the highest award of the Motherland — the stars of Hero of the Soviet Union, more than 100 people awarded state awards for work in the rear. We remember, we are proud of!, - commented the company.

The representative of Rostselmash noted that the choice of tractor was not accidental, since it is the most powerful tractor produced in the Russian Federation – symbolizing the strength and power of our country. Today Rostselmash is the only CIS manufacturer of tractors of high power from 440 HP Starting serial production of high-power machines, Russia entered the market of heavy tractors, which is still attended by only foreign brands. The representative of new family of Russian tractors - 3000 series RSM – in the first season got decent ratings from consumers and experts. The victory at prestigious competition "100 best goods of Russia" - one more confirmation of high vosstrebovannosti machinery Rostselmash.

Последние новости
17:02 The Ministry has supported the introduction, from 1 April temporary quotas on grain exports from Russia
16:08 Dear sunflower seeds may slow the growth of oil and fat industry
15:02 Freight report, 13 week 2020
14:03 In Kyrgyzstan, the poor will distribute 10 000 tonnes of flour from the Fund Matreserve
13:00 The list of participants of the IV Global Forum Fishery & Seafood Expo Russia will be enriched by the manufacturers of marine equipment
12:00 The Ministry of agriculture: the provision of socially important products is safe
11:07 Rosselkhozbank together with Withexpert will start telemetering for farm animals
10:08 Weekly review of the market of milk and beef from March 27,
09:04 For the week wheat wholesale prices have risen by 2.4 thousand
08:04 JSC Federal freight increased loading in gondola cars on far Eastern railway.d. 32%
17:33 Russian agricultural Bank has made a free settlement and cash services for small business in Krasnodar region
17:04 Mini-JCB has received recognition at the exhibition "AgroComplex"
16:08 The bill on viticulture and winemaking introduced in the state Duma
15:07 The Ministry of agriculture: the crop of berries will reach 19 thousand tons
14:01 From March 30 Russia temporarily closes border
All news