Tuesday, 26 May 2020
Weigh 10,000 tons of mushrooms? Easy!
In 2019, the agricultural machinery company actively engaged in the construction of weighbridges in Moscow and Moscow region. One of the customers is a "national Mushroom Company in Kashira". 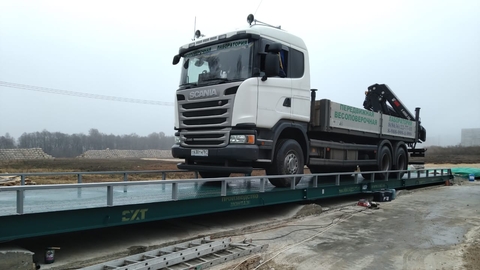 In 2019 , the agricultural machinery company actively engaged in the construction of weighbridges in Moscow and Moscow region. One of the customers is a "national Mushroom Company in Kashira".
The customer seriously come to the question of the choice of automobile scales and, consequently, the order entered in the company "agricultural machinery". For our part, we offered to make and install truck scales VA "agricultural machinery" 60 tons 18 meters with complete automation of weighing.
Engineering Department of agricultural machinery the company has developed a project for "NGK Kashira" which passed all stages of coordination with the customer. Construction and installation work was completed on schedule. Also performed installation and configuration of automation systems weighing of vehicles. Then truck scales were taken on all items of the contract and have passed state verification, commissioned.
For reference, a few words about our partner, a company of NGK Kashira:
"NGK Kashira" was established in February 2007 on the basis of Russia's largest champignons complex in the village of Novoselki, Kashirsky district, Moscow region.
In August 2007 were collected the first mushrooms grown in compost phase 3 production Baltic Champignons (Lithuania).
Over 10 years of constant investment in production development and new technologies, the company became a leader in the production of mushrooms in Russia. The company occupies about 40 percent of the Russian production of mushrooms. Production of mushrooms from 130 tons in 2007 increased to 5,300 tons in 2017.
Source of information https://voronezh.cxt.su/news/vzvesit-10000-tonn-shampinonov-legko/

Последние новости
17:07 Corteva Agriscience was the initiator and partner of the project "AGRO Career Navigator"
16:08 The Ministry of agriculture has assured that there is no need to create a special Fund wheat for millers
15:01 CLAAS: CORRECTING SATELLITE SIGNAL SATCOR 5 TESTED SEED
14:02 Prices for sunflower oil continue to grow. In the near future the price of oil and the sunflower will remain at a consistently high level
13:09 Producers of berries lose a crop
12:04 The Ministry of agriculture: the agricultural sector may grow by 1%
11:02 John Deere introduced a new line of headers for combine harvesters
10:00 Russia is not facing a significant price increase for food products
09:05 The Ministry of agriculture of the Russian Federation plans to carry out purchasing interventions in the grain market, as required
08:05 One of the main issues for agricultural machinery manufacturing sector is the future of exhibitions
09:08 "Chocolate" shared secret delicate cheese dishes: millions of servings of experience
17:05 Round balers Massey Ferguson® is entering the Russian market
16:01 Weekly review of the sugar market from 26 June 2020.
15:08 "Russia Calling": the agricultural Bank has invested in the investment projects of the Republic on the construction and reconstruction of APK of more than 7 billion rubles
14:08 Chickpeas becoming a popular export crop in Russia
All news