Thursday, 18 June 2020
The Ministry of agriculture increased the forecast of grain harvest
The new season is planned to carry out purchasing interventions 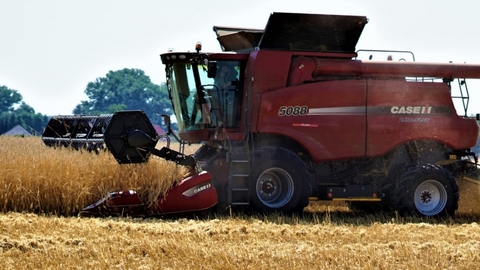 The Ministry of agriculture increased the forecast of grain harvest this year from 120 million tonnes to 122,5 million t, the estimate of wheat production remains at 75 million tonnes, the Export potential in the season 2020/21 is estimated at 45 million tons, said the Ministry on the results of the working meeting with the largest Russian grain exporters.

The meeting was also discussed that purchasing interventions in the coming season will not be told to "Agroinvestor" the Chairman of the Union of grain exporters Eduard Zernin. "We developed a new mechanism taking into account our proposal to reformat the state Fund to support the flour milling industry," he said. Earlier, the representative of "United grain company" (UGC, the state agent for the intervention) said, "the Agroinvestor", together with the Ministry of agriculture the company is considering a new concept of selection of guardians of the Federal grain intervention Fund to enhance the monitoring and promotion of the interests of market participants, also addressed the issue of increasing grain production to 6 million tonnes for at least three years. It was assumed that about half of the grain will be directed to support of the millers.

As for the quotas on grain exports, then, as planned, in the first half of the new season it will not be introduced, confirmed Zernin. Earlier Reuters reportedthat Gravedust no plans to set a quota at the beginning of the agricultural year. "Now the mechanism of quotas being finalized based on the experience of the past season. Already running private legislative initiatives, including the abolition of the incomplete customs Declaration for the export of grain. The final version will be proposed in October — said Zernin. — The decision of a quantitative limitation will take based on indicators of actual harvest and export potential of the new season."

"The initiative for the abolition of the incomplete customs Declaration — a step in the right direction from the Ministry of agriculture, however, we are against quotas as the system measures continuously the current in the second half of the season," commented "the Agroinvestor" the General Director of the Institute for agricultural market studies Dmitry Rylko. As for lifting grain interventions, that, in his opinion, this decision is premature. "Before you abandon the procurement, it was necessary to develop and try out new gear, and already convinced of its effectiveness, to close the current concept, says Rylko. — As it is a gap: one measure of support, in fact, abolished, and the second is in its infancy, although some state Fund of grain, of course, the country needs".

In General, the priority of the state policy of food security of the country, said Zernin. "I believe that the recent initiatives — as the reorientation of grain interventions Fund for support of millers, and export quotas — the right strategic moves, he said. — By the way, the quoting in the past season have proved their efficiency and timeliness. Otherwise, we would be faced with the problem of critically low carryover grain, already a record low, which is unacceptable from the point of view of food security of Russia". Thus, according to Rosstat, the stocks of wheat from farmers on June 1, was of 2.76 million tons, which is 12,6% less than a year ago and 20.5% below the average of the five years.

Meanwhile in Russia the grain harvest. After the Crimea, who last week begun to harvest winter crops, harvesting began in Krasnodar and Stavropol Krai. "Krasnodar Krai is one of the first regions of Russia started the harvesting campaign. In Vyselkovskiy and Dinskoy districts already threshed several hundred hectares of winter barley, — quotes the Governor of the region Veniamin Kondratiev site boundary approvedate. — In General, the area of grain crops in the Kuban region this year amounted to 1.77 million hectares". The head of region has reminded that from-for frosts and drought in the region shortage of grain and leguminous crop species. If the weather does not fail, the harvest of early grain is traditionally 15 days, said Kondratiev. Last year the farmers of Kuban harvested 11.1 million tonnes of grain.

Farmers of the Stavropol territory have to remove the grain from 2 million hectares, reports TASS with reference to the press service of the Governor of the region. Last year, cereals occupied 200 thousand hectares more — the reduction is due to the deficit of productive moisture in a meter layer of soil. The region started harvesting winter barley, threshed, 10.2 thousand hectares, gross yield was 22.2 thousand tons with an average yield of 21.7 t/ha. Harvest in the Stavropol region is projected at 5.4-5.8 million t