Friday, 19 June 2020
The Ministry of agriculture will be engaged in selection of olives and genetics beef cattle
Federal scientific-technical program of development of agriculture can be complemented by three routines 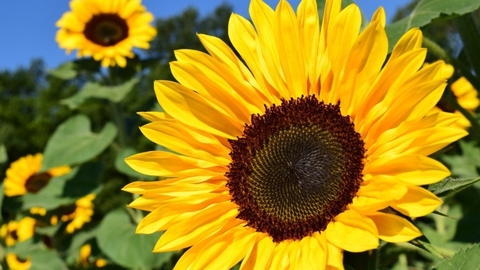 The agriculture Ministry plans to Supplement the Federal scientific-technical program (RRTP) the development of agriculture the 2017-2025 years three subprogrammes. The first concerns the development of selection and seed growing of oil crops. Second — improve the genetic potential of cattle specialized meat breeds. The third — development of viticulture, including the nursery. Relevant draft resolution published on the portal of projects of normative legal acts.

Annual in Russia, sown by the seeds of hybrid oilseed agricultural crops of foreign selection in the amount of 16-17 billion rubles, which, in the opinion of the authors of the document, determines the high risks of dependency of the Russian oil and fat subcomplex from imports. The products of the domestic breeding remain unclaimed in the domestic market due to the low level of state support for breeding and the lack of incentives for investment and financial incentives for distributors to sell expensive imported seeds.

Created by the routine varieties and hybrids by the end of 2025 will take at least 500 to 550 thousand hectares, of them will grow at least 30% of agricultural enterprises engaged in cultivation of oil crop species, estimates the Ministry of agriculture. Projected gross yield of sunflower in 2025 will reach 16-18 million tonnes, stated in the explanatory note to the document.

The second sub — programme "Improving the genetic potential of cattle specialized meat breeds" — should ensure stable growth of production in beef cattle due to technologies in the field of genetics, selection and breeding, as well as modern technology. The subprogramme will ensure the reduction of imports and growth of exports. By 2025 investment in this direction should be 13.1 billion RUB from the Federal budget will be allocated 7 billion rubles.

The objective of the third subprogram is the growth of production volumes of viticulture on the basis of improvement of grapes assortment (in the first place, varieties and clones of native selection), the use of disease-free planting material, application of new highly effective technologies. As a result of its execution is expected to increase domestic production, reducing import dependence, increasing the competitiveness and export capacity of the viticulture industry. By 2025 the sector is expected to attract 965,6 million rubles of investment, amount of support from the Federal budget is estimated at 852,4 million rubles.

It is very important to invest in domestic research, especially in the field of plant breeding and genetics. These areas the last decade has been underfunded, with the result that by 2018, the share of import of sunflower seeds increased to 73%, says senior Manager of group providing services to agricultural enterprises, EY Maxim Nikitochkina. He believed, however, that is not entirely important to invest in the genetics of meat breeds of cattle because beef consumption in Russia has a negative trend, while its exports are very small. According to Nikitochkina, more relevant areas — dairy breed of cattle (although strong competition with the European countries), cereals, sugar beets, potatoes. The last two routines already present in FTP, but according to market participants, there are problems with financing and sales, adds Nikitochkina.

"Now the share of import of seeds of wheat in Russia is only 2%, however, there are risks that in the future other countries will be able to develop more efficient varieties, and in this case, these 2% can start to grow rapidly. It is also necessary to Finance the development of genomic technologies (e.g., CRISPR, RNAI tech) seed — this is the future," commented "the Agroinvestor" Nikitochkina.

He adds that the subprogramme objective is very ambitious, so the probability seems low. The main difficulties in the performance of low funding, which came in the decline of the infrastructure of scientific research (including the problem of personnel), lack of communication between the business and basic science — state institutions, says Nikitochkina.

According to the head of the Center for economic forecasting of Gazprombank Darya Snitko, it is necessary to develop areas which are marginal and bring more added value to the economy. "There are few countries which provide for ourselves in terms of the means of production for agriculture. Russia supplied with mineral fertilizers, the process of development of own production base of agricultural machinery (including through the localization of production of foreign companies)", — she said, "the Agroinvestor". However, in the production of seeds, planting and genetic material of animals, the country lags behind. The level of development and agricultural modernization, achieved through large-scale investments of the past 20 years, really sums up the agricultural sector to the stage of increasing expertise in the complex scientific areas involving agriculture, concludes Snitko.