Monday, 22 June 2020
Analysts have raised the forecast of gross yield of sunflower
Adjustment relates to increased moisture reserves in the major regions-producers 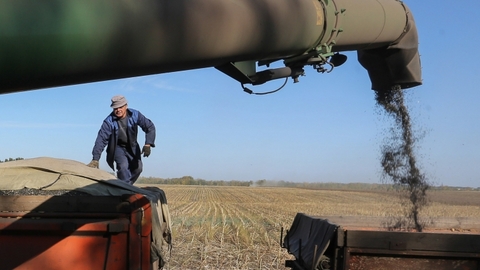 Analytical centre "Sovekon" has updated the forecast of sunflower crop this year. According to the company, it will amount to 14.6 million tons instead of the 13.9 million tons, as reported in may. Harvest at 14.6 million tons will be the second figure after the 15.4 million tons collected a year earlier, said the center. The Russian grain Union (rzs) said that the crop could be about 15 million t. "it's hard to say, since clarity with the weather there," — commented,"the Agroinvestor" Vice-President of the Russian grain Union Alexander Korbut. According to the June forecast of the Foreign agricultural service of USDA (FAS USDA), the sunflower crop in Russia will amount to 15.5 million tonnes.

Analysts "SovEcon" raised the Outlook on the background of increasing moisture reserves in the soil after rain in the main regions of sunflower sowing campaign. Most regions received 110-150% lower than normal, which created favorable conditions for late crop species, including sunflower. Also "Sovekon" has raised the average forecast yield of 1.62 t/ha to 1.7 t/ha.

Sunflower old crop continues to rise. Last week, according to "SovEcon", average prices rose by 675 RUB to 26.3 thousand RUB/t (European part of Russia, net of VAT). However, good views of the new crop in Russia and Ukraine in the coming months will put pressure on export prices for sunflower oil and sunflower, analysts say.

According to OilWorld, last week sunflower prices were stable in the purchase and sales they grew only in the Volgograd region (+100 to 24.1 thousand RUB./t and 26.7 thousand RUB./t, respectively), the decline was recorded in the Saratov region (-100 to 24 thousand rbl./t and 26.1 thousand RUB/t). In addition, 100 RUB increased price per ton of sunflower in the Tambov region, where he is willing to sell for 25.8 thousand.

"Now the price of sunflower is relatively stable, and soon they, I think, will not significantly rise or fall. While export prices for oil are high enough, thanks to the current indicators for seed macadamias allows companies to export products processing with the required margin level," — said Korbut. According to him, the ratio of export prices to domestic oil and sunflower leads to the race of processors for raw materials whose objective is less than last year. "And if they don't want to stop the export, or on the world market is not going to happen events that will lead to a significant drop in the price of oil, the price of oilseeds will be supported," adds Korbut.

According to the Ministry of agriculture on June 18, sunflower planted on an area of 8.3 million hectares or 102,2% of the forecast area. Korbut explains that the projected area is formed according to the Federal and regional agricultural offices, and usually they are much less than what you really plan to plant farmers.

Agricultural producers have already responded to measures of market regulation — the prohibition of exports of sunflower outside the EAEU from mid-April — they have reduced the acreage from 8.5 million hectares to 8.3 million hectares. "for the First time after five years of growth of area under sunflower reduced, — said Korbut. — I guess that's the reaction of farmers on the control measures of the state: they decided to go to other agriculture".

Meanwhile, earlier it became knownthat Russia plans to raise export duty on sunflower seeds to 20%, but not less than 80 euros per tonne, from the current 6.5%, but not less than EUR 9.75 per ton. In the case of a decision is it to act from 1 February to 31 August 2021. In addition, the extension from 30 June until 31 August a ban on the export of sunflower outside the EAEU also considered useful.

Farmers in the last year knew that the export duty on sunflower seeds may increase, said the Department. "We then managed to restrain the growth of tariffs, but now, as the "fog of war", the restriction approve. If they took in November-January, that area would be even less," says Korbut. He believes that if the government does decide to increase the export duty on sunflower, in season 2021/22 area under it will be reduced.