Thursday, 23 July 2020
Acron increases its production of ammonia in Veliky Novgorod
The Acron group on its site in Veliky Novgorod is implementing a project to increase the capacity of the unit "Ammonia-4" up to 2500 t/day, which is 21% above the original design capacity. Investment in the project will amount to 34 million dollars. USA. 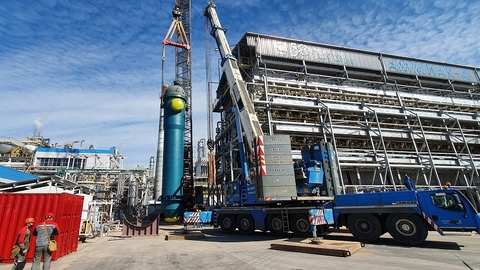 At the moment, on site plant installed major equipment reactor heat exchanger reformer technology of Danish company Haldor Topsoe (HTER). The vehicle, weighing about 180 tons, with a height of 18 m and a diameter of almost 4 m will take up to 20% of the raw material gas and will greatly enhance the division's performance conversions shop. World experience in the industry, such equipment has more than 15 years and has shown its effectiveness and long life.

Previously, the project has completed the installation of two cooling towers VI-14 and VI-14C, additional air coolers, new heat exchange equipment and the pump the production of ammonia. To increase the efficiency of streamlining boiler STEAM-100.

Starting operations Assembly "Ammonia-4" is scheduled for the end of 2020. They will be combined with the first overhaul of the unit, which works based on the four-year cycle of the run. The completion of the modernization project will increase the capacity of the unit "Ammonia-4" 900 tons of product per year. The total volume of ammonia production at the Novgorod enterprise will grow to 2.2 million tons per year.

Chairman of the Board of Directors of JSC "Akron" Alexander Popov said: "the Intensification of the unit "Ammonia-4" – important project of our investment programme Acron Group. The capacity increase will significantly increase the production of nitrogen and complex fertilizers, at "Akron" in Veliky Novgorod".

Ammonia-4 of JSC "Akron" – one of Europe's largest units for the production of ammonia. This is the most significant investment project in the Novgorod site of JSC "Akron" in recent decades, and the first ammonia plant built by Russian experts since the collapse of the Soviet Union without the involvement of foreign labor force on the basis of design documentation prepared by the Russian design Institute – JSC "Novgorodsky GIAP". The launch of the unit took place in 2016 in the presence of the President of Russia Vladimir Putin. Investments in the project amounted to about $ 500 million. USA.