Friday, 24 July 2020
Russian engineers have developed a batch of water drones patrol to rescue the drowning persons and the fight against poachers
Russian design Bureau Man & Technologies Lab has developed the first batch of water drones to monitor and patrol the water. Also the drone can serve as a high-tech "lifeline". The first party has supplied the relevant state to the client. 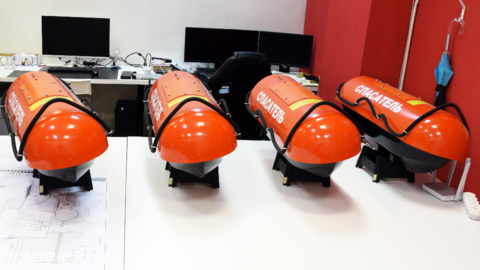 The idea of the project young engineers came up during the study of water transport in Yakutia. With the local river ferries in the summer season quite often fall for people that often ends in tragedy, as quickly to help them not get: strong river current carries them immediately from the vessel and does not allow dokinut circle. To solve local inventors created a prototype of a floating buoy. However, the device contained a number of design flaws. Like a circle with a motor device with blades and a cue at the time when it clung like a drowning man, almost immediately he rolled over and propellers were above the water. As a result, the device stopped and only aggravated the situation.

The design specialists in Man & Technologies Lab agreed with the Yakut colleagues and took the prototype to the capital in order to create a fundamentally new device. In the first place solved the problem with symmetry of the body: similar to a capsule, the device is now kept working mode in any position, even while turning propellers have always been in the water. In addition, it substantially improved the control system. “Our market research showed that this device should not move just for the manual control via radio in the zone of actual visibility, as originally planned,” says CEO Michael KB Krupinoj. — In the waters of the beaches people on mattresses for often takes 2 — 3 kilometers, effective and safe to control the drone from the land at this range is impossible, that's why we decided to immediately start work on the video system”.

Engineers plan to implement the project in two phases. In the first phase, the current batch of drones will be further tested and modified in part of the system of video surveillance and target acquisition. In the second stage for the control of drones will create a neural network. The operator will teach the drones to correctly detect over and under the water surface anomalous behavior of objects. This leads to the fact that in the future the drone, mounted on a fastener, for example, under the pier, will continuously monitor water for this anomalous behavior and instantly to distinguish happily splashing in the water the rest of the real sinking of a man who reflexively waving his hands, trying to emerge. At the time of fixing the emergency, the drone automatically capture aims and “shoots” towards the drowning man. In seconds, without endangering other people nearby, the device makes it to man and helps him to safely reach the shore.

According to the developers, in the future we plan to use the device not only to save people, but also for military and border services. There, according to M. Nettle, the drone can patrol a potential zone for illegal fishing and to instantly detect poachers and other violators.