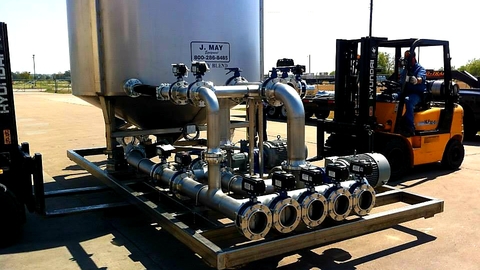 When selecting equipment for the production of CAS, utility services and other solutions of mineral fertilizers should not only handle the price, but it is important to know and understand the basics of the dissolution of dry fertilizer. This will allow you to choose the mixing system that will meet the stated performance characteristics and the quality of the fertilizer solutions.

We will try to help you to understand the basics of dissolving dry fertilizers in the production of CAS of different brands and choose quality equipment.

On the Russian market, many manufacturers of mixing equipment are often put in priority sales and maximize profits. Not all buyers are able to thoroughly understand the production of solutions of mineral fertilizers. Using this unscrupulous manufacturers can show the test reports of samples of CAS produced in their rastvornyh knots, with obviously inflated value content of the total percentage of nitrogen. Can be used various tricks with "newly developed formulations" and "the incredible capabilities of their equipment."

When selecting mixing equipment is recommended to ask the manufacturer the following questions:

1. "What brand of KAS and how many tons per hour (tons per day!), and how one cycle can produce the proposed equipment?" (for example, for a mixing system, "J. May Equipment" Maxy Blend 2-MT, is strictly a certain amount of 4 tons per hour, or 2 tons per cycle CAS-28/30/32).

2. "What recipe will be CAS this equipment?" (for example, produce one batch of fertilizer CAS is equal to 3 tons, therefore, it is necessary to specify what quantity of water, ammonium nitrate and urea is needed to produce one batch).

3. After you mentioned the recipe for one batch of KAS, take a calculator and make a calculation of DV (active substance) in percent total nitrogen. If the results of the calculations of the percentage it is lower than stated, – before you unscrupulous manufacturers. Most likely, the presented protocols will be about as given to them for study in the laboratory the samples CASS may have been falsified.

Remember! The resulting solution CAS cannot contain more nitrogen than in the feedstock, even if you are assured that apply "wonder pumps" or "technology, which is nowhere in the world."

4. After you have called the recipe, you calculated the total percentage of nitrogen, and it fit according to the manufacturer, you need to find out what is the temperature of the resulting CAS and the temperature at which solution is discharged from the mixing vessel. These parameters are very important for assessing equipment performance and quality of solution.

Why is it so important the temperature ready? Ammonium nitrate and urea dissolved in a certain concentration only at certain temperatures. There are tables of solubility of substances depending on the temperature, which cannot be neglected (see table below). Let's consider an example. You specify the recipe to be used the CAS: 1 ton water, 1 ton of ammonium nitrate, 1 ton of urea. Take a calculator, calculate the percentage content of total nitrogen (in this case, it will amount to 26.9 percent). It is obvious that the production of CASS by this recipe, the ratio of nitrogen forms (nitrate and ammonium contained in the ammonium nitrate to the urea amide) will be unequal, the fertilizer will get unbalanced. This will affect the efficiency of the CAS can cause the loss of DV after making and reduce the long-term effect. From an economic point of view, the production of this fertilizer will be less efficient.

The table of solubility of ammonium nitrate The table of solubility of urea in 100 g. water

If you indicate temperature readiness of the CAS table below indicators, you clearly misleading. It is important to know that to increase the concentration of total nitrogen in solutions of UAN in the production of this recipe, reduce the amount of water is unacceptable! This will not only lead to an imbalance of nitrogen, but also increase the temperature mode full dissolution of the components, which subsequently will affect the time taken to produce one batch of the fertilizer and the performance of the system as a whole.

Be aware that sample tests CASS in laboratories is carried out at room temperature and complete dissolution of the substances. Accordingly, the results of these samples will be incorrect, in contrast to the results of the newly produced solution. Unfortunately, today many laboratories have insufficient equipment to conduct studies of the same sample CASS. As practice shows, often this fact leads to differences of indicators in research protocols. We recommend you to order the test fertilizer CAS according to "GOST EN 15604-2013 - Fertilizer. The definition of the various forms of nitrogen in the same sample: nitrate, ammonium, and cyanamide nitrogen and urea", and to select a competent laboratory. We, like most of the major manufacturers of CAS in Russia, testing of the obtained samples together with the analytical research center "Kurchatov Institute", area".

For obtaining solutions of the fertilizers are of high quality strongly recommended to study carefully the principles of their preparation and responsible approach to the choice of the supplier of the equipment that will be the key to your success.