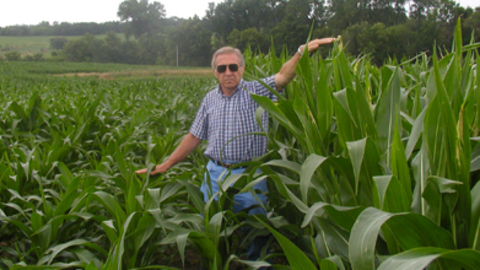 CAS-28, UAN 30 and UAN 32 is a transparent, without separation into layers, the solution of ammonium nitrate and urea. It contains three forms of nitrogen (nitrate, ammonium and amide), which provide a gradual release of elements to the availability of food crops and the duration of their actions. The basis for the production of urea-ammonium nitrate is a formula of Simplot (Simplot formula - see table below).

All manufactured forms of fertilizer CAS 28/30/32 should consist of 25% of nitrate nitrogen, 25% ammonium nitrogen and 50% of amide nitrogen, - this is their effectiveness. To ensure that the fertilizer had the same efficiency and the same quality indicators as the CAS produced in the factory, it is important urea and ammonium nitrate diluted with water in such proportion that the weight are in their active substances nitrate (NO3) and ammonium (NH4+) nitrogen in Salitre and amide (NH2+) of nitrogen in the urea was equal to each other.

In other words, the main indicator of the quality of CASS in its production is the mass ratio of urea and ammonium nitrate that is equal to 0.74 and 0.8. That is, for the production of 1 ton of fertilizer, for example brand CAS-30 is dissolved in 250 liters of water, 420 kg of ammonium nitrate and 330 kg of urea under certain conditions. For this equipment must be provided for dosing of raw materials into the mixing tank by its weight.

If the equipment for the production of CAS is not provided for accurate dosing of raw materials, it can produce liquid solutions with quality that will not meet the standards of production CAS-28/30/32. Such fertilizers:

• will not be stable solutions in which all components are completely dissolved, the risk of loss of salts in the sediment and therefore not known to the terms and conditions of storage;

• Cam solutions will be on the unbalanced forms of nitrogen, and therefore can have a lower efficiency.

Table relationships with dry masses of the components for the production of UAN solutions containing a total Awsat 28/30/32%.