Wednesday, 24 June 2020
Investment in the production of mineral fertilizers will exceed 1.5 trillion roubles over five years
In five years, the industry has increased the production volumes by a quarter to 50 million tons 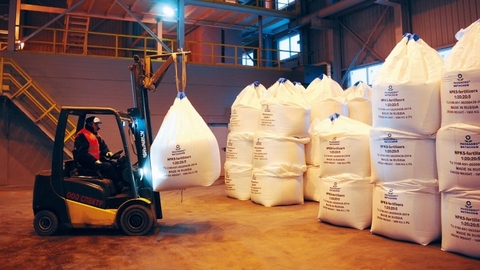 The Ministry of agriculture, by 2024, the fertilizer consumption in the country may increase up to 8 million tonnes in terms of 100% nutrients, that is more than doubled. Ensuring that this demand will require commissioning of all major types of mineral fertilizers and development of industrial and logistics infrastructure, which may take an additional 500 billion rubles cost to the already planned investment level of 1 trillion rubles. That is, the total of attachments may not exceed 1.5 trillion rubles., said "Agroinvestor" the President of the Russian Association of mineral fertilizer producers (brine) Andrey Guriev (re-elected to this position during the annual General meeting of the members of the organization until mid-2022, is also the General Director of "FosAgro"). "It is unclear how will be distributed the demand for fertilisers, but it is clear that the drivers of the market will be high-tech products," he said.

Since 2016 the production of mineral fertilizers in Russia grew by 20% to more than 50 million tons of end products in 2019. According to Guriev, the increase is the result of large-scale investments in recent years in the development of the industry invested more than 800 billion roubles. "we Have one of the highest among the manufacturing industry indicators for the reinvestment of funds in the development, also the industry leader in technological and digital equipment of companies, — stressed the President of the brine. — Today in Russia produced more than 150 different brands for solid and liquid mineral fertilizers and ameliorants, many of which have no analogues in the world, every year, the market is seeing five to seven new grades of products."

According to Deputy General Director for sales and marketing PhosAgro Sergei Pronin, domestic producers of fertilizers are actively cooperating with innovative collections, research and educational institutions, both in terms of development of new fertilizers and the training of agronomists. Work is underway on the creation of completely new products such as biostimulants, biomaterialia supplements, correctors of the power inhibitors he enumerates. They allow to increase the yield and quality of agricultural products.

For the next five years, the company has planned a brine of more than 1 trillion RUB. of capital investments to expand capacity. For example, PhosAgro expects 2025 to invest in the modernization and construction of not less than 200 billion. This will allow the company to increase production of mineral fertilizers by 20% to 11.5 million tons per year. Also, the group plans to continue developing its own distribution network "PhosAgro-Region", including logistics for liquid fertilizers.

"EuroChem" in the future, the next five years expects to significantly expand production of complex fertilizers. "Akron" is the project of deep modernization of Urea unit №6, after completion of which, in 2021, the capacity of the plant will increase to 1.9 million tonnes per year. The "Akron" will be able to produce up to 1.4 million tonnes of dry product (granulated and Pellerano) and to produce liquid fertilizer UAN. URALCHEM initiated a number of projects related to the increase of the production of water soluble fertilizers, potassium nitrate, complex fertilizers with sulfur. A significant part of investments is concentrated in potash projects aimed at doubling the Russian capacities on release of potassium chloride to 25 million tonnes.

Andrey Guriev, the President of the Russian Association of manufacturers of mineral fertilizers:

— Russia remains the only country in the world that fully covers all the main types of mineral fertilizers and supplying them abroad. The growth of production volumes has allowed the Russian companies following the results of last year to increase global market share to 13% and to maintain second place in the ranking of the largest world manufacturers of mineral fertilizers. Our products are now popular in more than 100 countries.

First and foremost, active investments associated with the growth of the domestic market, said Guriev. Although plans to increase production capacity always raise logical questions about the risk of oversupply in the coming years, this risk would not be implemented, he said. "The potential of Russian agriculture, without exaggeration, is enormous, — says the President of the brine. In Germany, according to FAOSTAT, on 1 hectare paid on average 189 kg of fertilizers (in recalculation on 100% nutrients) in the United States — 128 kg, in Canada — 102 kg. In Russia, according to the agriculture Ministry, the volume of any in the past year amounted to only 48 kg/ha with the recommended norm of 70 kg/ha."

Earlier, the Ministry of agriculture increased the forecast of purchases by farmers of mineral fertilizer in 2020 to 100 thousand tons (in active ingredient) to 3.8 million tonnes, According to the Department, their contribution per hectare this year will increase from 48 kg to 53 kg.

While the Ministry's forecast is justified, says Guriev. In January-may agricultural companies have already bought nearly 2.5 million tonnes of mineral fertilizers, is more than 65% of the estimated volume of annual demand, he gives the figures. Last year, domestic farmers have purchased 3.5 million tons of mineral fertilizers (in recalculation on 100% nutrients), which is 11% higher than a year earlier.

"The actual volume of procurement in 2019 by half a million tons exceeded the forecast figure, a substantial portion of transactions in excess of the plan occurred in the fourth quarter, says Guriev. — Growth of demand contributed to a favourable market situation: according to Rosstat, last year in the Russian market the average price of all types of mineral fertilizers was lower than a year earlier, this situation continues even now." According to the Ministry of agriculture, over the past five years, farmers increased purchases of fertilizer by 40%.

In 2019, the Russian manufacturers produced more than 50 million tons of mineral fertilizers in physical weight, which is corresponding to 23.6 million tonnes in terms of 100% nutrients. Production growth compared to 2018, amounted to about 5%. The industry accounts for about 40% of exports of the chemical industry in monetary terms, estimates Guriev.