Thursday, 18 July 2019
Fire, water and copper pipes: as new corn hybrids are tested in terms of season-2019
Was this year's DEKALB corn hybrids entered in more than 40 different tests conducted at Russian fields. Part of the results farmers will be able to assess in the framework of the annual Innovation center DEKALB, which will be held in the first half of August in the Krasnodar region. 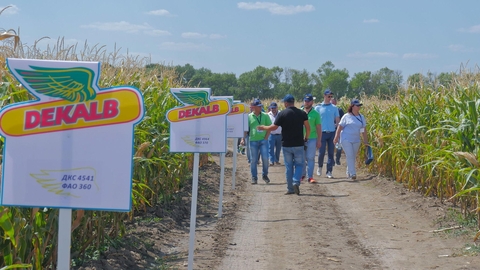 The hybrid DEKALB DKC 5075 (FAO 400) and BCS 2972 (FAO 200), registered in the current year has already been actively tested in the conditions of Russian agricultural enterprises. Typical southern hybrid DKC 5075 (FAO 400) was involved in рамках10 demonstration experiments and tests "side by side", when the main sowing in the region is coming to an end.

Plot with him was laid on the territory of the Innovative center of DEKALB in the Krasnodar region. In his work at this time, the emphasis of the experiments is to study the dependence of harvest on the quality of sowing, factors that protect plants from diseases and pests, as well as a deeper study of the effects of combinations of seed treatment Acceleron (Acceleron), which received up to 40% of DEKALB seed this year.

"Despite the fact that hybrid DKS 5075 were sown later than the optimum time, we can evaluate its potential. Despite drought and high temperatures including during flowering, the product shows good architectonics and seemingly no way inferior to their neighbours that were planted a week earlier", – says Roman Kharlamov, head of development Department of technology DEKALB in Russia.

It is also interesting that the new DKC 5075 were planted and irrigated areas, which will allow to compare its potential with the cultivation on non-irrigated areas. Despite the fact that artificial irrigation – the technology is expensive, in the regions with consistently insufficient Flavobacterium, which includes most of the districts of the Astrakhan and Volgograd regions and Stavropol territory, it is economically feasible. Therefore, the completion of the supply of new high yielding hybrids suitable for this technology, here is very important.

Hybrid DKC 2972 (FAO 200), intended for the Central Chernozem region, was involved in more than 25 different experiments in the region. In their framework are able to evaluate the high seed germination and uniform, stable and fast early development.

"The results of only one year of testing, we do not make any global conclusions about new products: from year to year is different, and the behavior of the hybrids will vary. The collection of the test basis is always a process of accumulation of practical experience for several years. But to assess the sustainability of new products to a number of negative factors as, for example, drought during flowering, even the appearance of plants we already have. Depending on future weather conditions, we plan to evaluate their resistance to lack of moisture during ripening," concluded Roman Kharlamov.