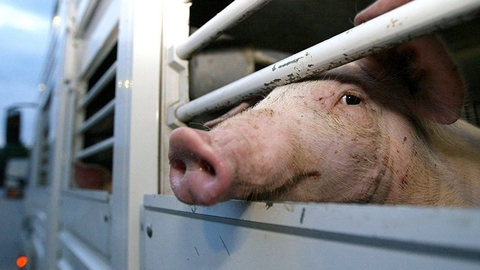 To such thoughts pushing poor farmers to trade in the quarantine zones, as well as the difficulty of disposing of pigs from these areas. For example, because of restrictive measures is located in the quarantine areas and slaughterhouses are unable to take animals from the neighborhood. Breeders have to take pigs for slaughter hundreds of miles in the territory, free of ASF virus. Small farmers have to collect a large party, to somehow to reduce costs.

Farmers in the infected areas are unable to sell their pigs. Meat processors are unable to buy them. Veterinarians disoriented. This problem, which has been known for several years. says Tołwiński. - If the authorities had the desire to actually help, she had to let the slaughterhouses in the quarantine areas to buy pigs from local farmers.

Another part of the problem is the drop in the price of ivoc from areas affected by the virus. According to farmers, after the registration of the outbreak and restrictions, the price of pigs is reduced immediately. Besides automatically imposed thirty-day ban on the movement of animals, during which pigs are ready for sale, you can go to class "overgrown", and this is again the loss in price.

Последние новости
17:05 The HARVEST 2020: July 8 produced 15.3 million tons of grain
16:09 Canned antlers 40.3 million. USA exported from the Republic of Altai 2017
15:07 Freight report, week 27 2020
14:01 The Ministry has supported the project on the processing of expired products into animal feed and fertilizer
13:04 Natalia Smolyarenko appointed head of the Crop Science division of Bayer in Russia and CIS countries
12:01 The security Council noted the importance of developing seed
11:09 "Rosgosstrakh" in Stavropol Krai Agroholding paid 11 million rubles for the lost crop of winter barley
10:07 Experts of the grain market changed the assessment of crop in Russia this year, no single dynamics
09:05 Voronezhselmash tools in the Vladimir region Elevator complex
08:09 IN THE KURSK REGION A SOLEMN CEREMONY OF LAYING OF THE FOUNDATION STONE AT THE CONSTRUCTION SITE OF THE NEW CATTLE-BREEDING COMPLEX OF GK "AGROPROMKOMPLEKTATSIYA"
17:01 Weekly review of the market of oilseeds from July 6
16:05 The registration is open for the SmartFarm exhibition for professionals of the agricultural sector
15:06 What factors affect the development of agricultural machinery in Russia
14:03 The import of palm oil in January-may 2020 amounted to 76 thousand tons
13:09 AGCO-RM announces the release of the Russian market of equipment Fendt® for forage
All news