Wednesday, 18 September 2019
CLAAS: THE INCREASE IN CRUDE ASH IN THE SILAGE BY 1% REDUCES YIELDS BY 100 KILOGRAMS PER HECTARE
One of the key areas of continuous development and improvement of forage harvesters CLAAS is providing the maximum net cleaning and reduced contact with food particles of soil. This indicator has a significant impact on the nutritional value of green mass and, consequently, the profitability of milk production. Conducted jointly with specialists of the Agricultural Board of Schleswig-Holstein, the study confirmed that even a slight increase in the content of crude ash in the silage by 1% already leads to a drop in milk production, about 100 kg per one hectare of harvested green mass. 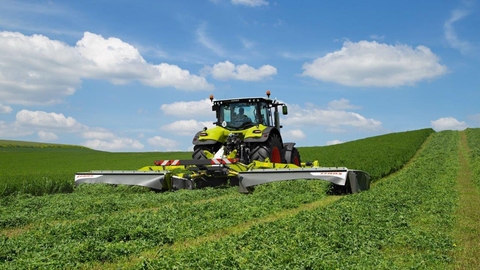 As noted by German experts on nutrition of cows and fodder, an acceptable level of content of raw ash is the presence in 1 kg green mass 100 g impurities mineral substances, i.e. about 10%, of which the indigestible part – the sand, have an average of 2.7%. The excess level of pollution in the 8-10% adversely affects the fermentation process, contributes to the spoilage of silage and the formation of butyric acid, which in turn decreases milk production.

According to experts, among all the factors affecting the ash content in the silage, 40% is the accuracy of the adjustment of forage harvesters. In particular, it is important to observe the height of cut not less than 4 cm, so the knives did not touch the ground. For example, disc mowers CLAAS DISCO this task effectively solves the AUTO CONTOUR system, providing the cutting beams clearly follow the field relief. High cut also helps to ensure that when swathing and tedding rake won't touch the ground as the crop mass is lying on a high pillow stubble. The rakes CLAAS LINER over the pure crop treatment herbs promotes gimbal suspension with three-dimensional adaptation to the terrain and the special design of the tines.

"The main thing that is important to remember when the fodder – it's almost impossible to save on quality. Good food from the bad can energy values differ in two times, with costs in both cases are the same, however, due to errors in the settings of the art in green mass, for example, to get a significant amount of soil. It is noteworthy that the selling prices of feed, which implemented the surveyed households also differed two times, mainly due to the difference in quality and nutritional value," notes product Manager at technology for forage harvesting CLAAS Roman Fedotik.