Thursday, 19 September 2019
"DOBROLET" BREAKS RECORDS: MORE THAN 100 THOUSAND PETS RECEIVED HELP FROM THE RUSSIANS
Network pet shop "Four paws" has summed up the annual all-Russian charity campaign "Dobrolet". In August, members helped 100 000 Pets from shelters, sending over 82,000 items. This campaign became the most ambitious in the history of "Dobroslava". 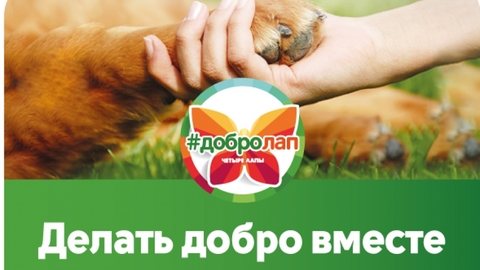 "Do good together!" – the slogan of 1 through August 31 was held a charity event "Dobrolet". Just over a month, the participants helped 100 000 students from 44 of the shelters, sending more than 82,000 units of important products, of which more than 3 000 kg food and treats 10 000 veterinary drugs and diapers, ammunition and products for the care of Pets.

In the framework of the volunteer team "Dobrolet" visited the cats of "Murtosa" in Moscow, the center of rehabilitation of animals "yuna" in the Moscow region, a Foundation for homeless dogs "Dogs who love" and a shelter for dogs "Dogs-assistants" in Shcherbinka.

Charity event "Dobrolet" was held in Russia for the fifth time. Every year the network of pet-shops "Four paws" gives people the opportunity to help those animals who are temporarily left without a home and a loving family. Throughout August shoppers shopping "Four paws" could choose to send a gift for a pet with a magnet and good surprises from the company. For kids in stores was prepared with convenient gift boxes that young helpers collected gifts for the animals from shelters, and together sent to the recipients. Help the little friend is happiness do wonders with their hands.

From the start of the charitable action "Dobrolet" the movement was joined by more than 70 partner organizations, more than 200 000 exhibitors and 10 000 volunteers from 30 cities of Russia.