Tuesday, 07 July 2020
The pace of the harvest is 2.3 times lower than last year
Average yields are also lagging behind, but has shown positive dynamics 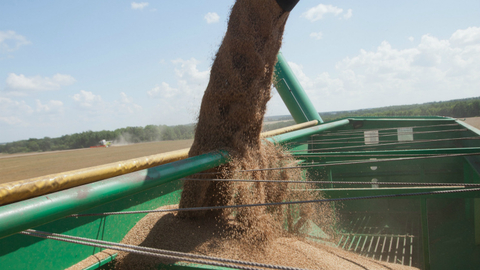 The pace of the grain harvest in Russia is still significantly lower than last year. By 2 July, farmers harvested 5.6 million tonnes against 13.1 million tonnes by this time the year before, reports "Center of agrobaltika" of the Ministry of agriculture, citing data from departmental monitoring. Including the gross harvest of wheat is 3,57 million tons — 5 million tons smaller than a year ago. Barley contains about 1.7 million tonnes a year ago, the result was at the level of 2.2 million tonnes.

However, compared with the previous week the gap was reduced to 26 June, it was produced 1.3 million tons of grain is 4.5 times less than for similar date of 2019. Wheat a week ago, the fee was almost ten times lower for barley — 1.6 times.

June 30, during a meeting of the operational headquarters of the Ministry of agriculture, the Director of the Department of plant, mechanization, chemicalization and plant protection Roman Nekrasov said that the adverse forecasts were not fulfilled, serious falling of productivity is not observed, and in the future the situation improves, the report said, "the agricultural centre". According to the official, what is now the indicators are worse than last year, due to the fact that the phase of the harvesting has entered the territory which suffered most from adverse weather conditions.

Earlier it was reported that the most significant losses are expected in the Stavropol region. According to the Ministry of agriculture of the region on July 3, there have been thrashed about 986 thousand hectares of grain crops and bean — 48% of the harvest area. The gross yield is 2.5 million tons with an average yield of 25.3 t/ha. last year at this time, crops in the Stavropol region was removed with almost 1.4 million hectares, gross yield was 4.8 million tons with an average fee per hectare of 35.2 kg/ha.

Rostov region has collected its first million tons of harvest 2020. The active phase of cleaning has begun in nearly half the districts. I think within weeks the whole area will turn on. You can talk about the good harvest this year. To make accurate predictions probably will be somewhere in a week. I think as a result the area will gather 10 million tonnes (quoted on the website of the government of the region).

In the Krasnodar region in the beginning of July received about 2 million tonnes of grain. "The work is going at a good pace. The whole region was threshed almost 400 thousand hectares of farmland or 21% of the target. <...> Srednekraevogo the yield is lower, but this is expected, given the difficult weather conditions this year, — said the Minister of agriculture and processing industry of the region Fedor Derek (quoted on the website of the regional administration). — At the same time, in some municipalities, the yield at the level of last record year. In 16 districts of the region the yield of barley ranges from 60 kg/ha to 72 kg/ha".

In mid-June, the Ministry of agriculture increased the forecast of grain harvest from 120 million tonnes to 122,5 million t, however in Accolade on the implementation of agrigaspolymer for 2019 States that the gross harvest is expected at the level of 121,9 million t. meanwhile, last week, market participants saidthat if the gross grain harvest will amount to 125 million tons, the Ministry will not impose a quota on exports.