Tuesday, 07 July 2020
To help the cows of Tatarstan came the Internet of things
Talk on the example of farms in the Khabarovsk, as new technology helped the dairy farm 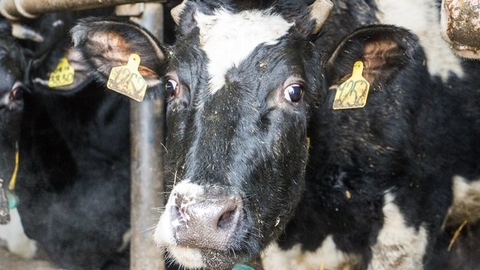 To the agricultural sector comes the trend of the introduction of modern technologies that allow the Internet of things for the livestock complex. Now Moldovan farmers can track the health and condition of cows through the sensors, information from which online enters into the computers of the dairy complex. How to optimize the work in agriculture on the example farm in Khabarovsk — in the material "Real time".

IT is for the agricultural sector

As international experience shows, the use of new technologies increases the efficiency of farms by 15-25%. In Russia, the introduction of innovations in the agricultural industry today is gaining momentum. As considered in PwC, the share of domestic enterprises, using modern technology, is not more than 10%. But in the next 3-5 years, their number may grow in multiples. According to the Ministry of agriculture of Russia, the Russian market of digital technologies in the agricultural sector amounts to 360 billion rubles, and after 6 years, a fivefold increase. The Internet of things can be useful in almost all spheres of agriculture, and it inevitably comes back.

One of the companies that are already practicing the use of new technologies, has become a farm in Khabarovsk. Chairman of Khabarovsk SPK "fertile" Oleg Borisov noted that the decision to use the most modern equipment for efficient work was made during the creation of microenterprises, which runs from February 2019. Then on the farm in the barn has installed a video surveillance system from MTS, and recently introduced another development of the company — "smart" sensors that give the opportunity to run a dairy farm. The mechanics of the cow swallows the bolus connected to the cloud service. It monitors the needs of the individual animal and its condition, promptly sending the information to the operator.

Sensors MTS Smart Farming after being hit in the stomach of the animal there until the end of his life. The system involves complex issues. Real-time 24/7 they can be used to monitor the health of cows, to obtain information about possible diseases before the stage of their development, to monitor heat and water stress, to automatically identify the rut and calving. For employees in the system automatically generated the work tasks they are given. Owner and managing dairy farms have access to cloud storage, which receives all information.

— Our cooperation began with the installation of CCTV in the barn. The results satisfied us, so we decided to take advantage of the new offer of the company to monitor the health of animals and employees. The use of new technologies eliminates the human factor in production control and allows you to control all the processes remotely, literally in real-time. We decided to implement the development, because I care about the health of our animals, as well as the goal to economically and efficiently use all resources, — said the interlocutor of the edition.

For technology implementation from the customer only requires a detailed formulation of the task makes all the rest of the development team.

— We have selected animals which will make the system, chose a suitable place for examination, to understand how to place the equipment. We needed to have a computer with Internet and system installation, personnel training "turn-key" engaged in MTS, — Chairman SPK "fertile" Oleg Borisov.

To be more precise, the company itself carries out all the calculations, deploys the network, sets the boluses and configures the software. Moreover, it is at least another six months after that leads its clients, helping to debug all the process, optimize approaches to work and even to find weaknesses in the functionality of the farm to share their work.

SPK "full of grace" while testing new technology, the economic effects of which can be assessed towards the end of the year. The plans include the expansion of the cattle population with "smart" sensors.

Reduction of costs and growth of yield

As shown by the test study, the technology is able to identify the disease cows five days before the onset of symptoms, and the next calving for 15 hours. Through the diagnosis, treatment can be started sooner, using 15% less medication. A more efficient layout of reproduction leads to increased yields. The duration of the service period, it is possible to reduce the average Russian from 150 days to 90 days. As a consequence, yields increase by very significant figures, which in the case of large companies hundreds of thousands of tons of milk a year.

In Tatarstan, a new solution was presented at the field Day.

— I am sure that in a region that is a leader in dairy production, technology in agriculture can provide substantial support in development of this direction. According to the Analytical center of the Ministry of agriculture, the application of big data technologies, "agronomy" the Internet of things, artificial intelligence and machine learning could double the efficiency of the Russian agro-industrial complex, and the costs of production and storage of agricultural products — to reduce by 15%, — says Director of MTS OJSC branch in the Republic of Tatarstan Marat Shakirov.

Of particular relevance is the application of technology is becoming due to the spread of a new coronavirus infection. Introduced in connection with these measures, the regime of self-isolation, social distance, led to an increase risk of stoppage of production processes. The material produced in conjunction with MTS, a specific example is disclosed as to help enterprises come of it system in the organization of personnel and remote monitoring of the condition of the animals, regulation of microclimate in the premises for the maintenance of the herd.