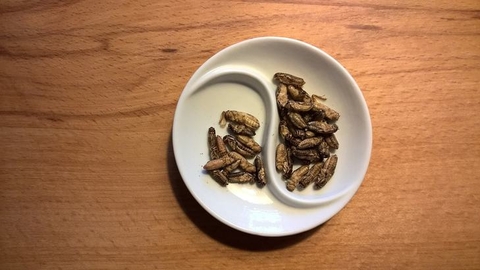 "Review of the industrialization of edible insects: the scale of production and implications for sustainability" was published in the journal Environmental Research Letters. Authors: McKenzie Wade, a doctoral student in anthropology at the University of California, Santa Barbara, and her colleague Jeffrey Hoelle, associate Professor of anthropology.

Edible acecombat becoming a popular trend. Supporters believe that farming insects is better for the environment than, say, ordinary selhozgodu, as there is less impact on climate change, there is more space for processing food waste, in addition, the output is a tasty product.

"Fried insects taste like bacon!" Says Mackenzie Wade, which firsthand about the culinary merits of worms flour castaneum. Even during the students she raised in her Dorm room meal worms, baked them cookies and treated them with friends at parties. And was considered a very tough girl.

Since then, Wade has dedicated his career to the study of edible insects. Her research spetsializiruyutsya on insects as food and cultural rejection of their use. And in the article she, along with Joella tried to understand whether large-scale production of insects is so steady, as expected.

The researchers reviewed 66 articles in 2018, which they call "a crucial year in studies of edible insects". Then they analyzed several aspects of industrial cultivation of insects, including Microbiology, external production factors, product development, acceptance by the consumer, as well as social and environmental aspects of the industry.

Wade, the lead author, said that almost every article focused on the sustainability of growing insects, especially compared with the traditional industrial farming.

"But in the publications of this kind there is no thorough and reliable study on the actual impact of mass cultivation of insects for resistance. And we wanted to emphasize this. And it is likely that in fact the industrial acecombat will yield conventional farming on a number of parameters. In business, efficiency and profit become more important than social and environmental aspects".

On the other hand, in the perspective of edible insects really do have an enormous potential to feed a growing population.

Approximately 2 billion people, mostly in the South of the world already eat insects, many species of which contain as much protein as beef, more iron than spinach, as much vitamin B12 as salmon, and all nine are important for human health amino acids.

The northerners, however, have a deep aversion to eating insects. Wade examines this with the analogy of dog meat: "for Example, imagine that you are happy to eat a tasty Burger, and suddenly you say that the meat in this dog. And it instantly changes the attitude to food though the taste is actually not changed. Thus, the knowledge that you received, change your reaction to the product. Culture and perception are closely connected."

Thus, edible acecombat as the industry is in the beginning and requires a lot of research to evaluate all the pros and cons.