Monday, 10 August 2020
Pork exports for the first time can reach 200 thousand tons
If eight years ago, Russia was one of the main importers of pork, last year the country became a net exporter 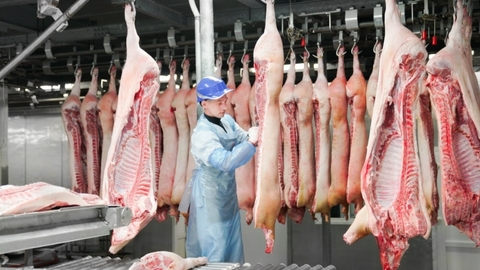 In January-June 2020 the exports of pork products increased by 96% compared to 2019 and reached 88 million tonnes, and 60% of export falls on the meat, although before two-thirds of the exports were by-products. About it the General Director of the National Union of pig producers (NSS) Yuri Kovalev said during the online conference "the Agroinvestor" "New challenges for the economy and agribusiness". For the year, if not force majeure, Russia will export about 200 thousand tons of such products worth about $300 million, while exports of all types of meat may be close to $1 billion, he estimated.

This year Russia may reach a record level of exports, though a few years ago, the country was heavily dependent on the import of pork. According to Kovalev, 2018-2019 steel as partners from foreign countries: in 2018 we achieved almost full self-sufficiency for this type of meat, and in 2019, the country became a net exporter and has completed a major phase of dependence on imports.

Experts of the meat market called this an unprecedented event: in 2012-2013, Russia shared the first place on the import of pork to Japan (then we have imported more than 1.25 million tons of this meat), and several years later achieved full self-sufficiency, says Kovalyov. However, the main driver of growth was not predamage 2014, although it was one of the incentives. "We have this process (import substitution) started early in 2005-2008," adds Kovalev.

As self-sufficiency, is sharply increased internal competition, which has decreased wholesale prices, this was particularly noticeable in the last two years: in 2019, they decreased by 8% to 2018, this year — another 10%. As a result, the consumption of pork in the first half of 2020 increased by 5.2% or 95 thousand tons of Falling pork is the only driver in meat consumption in Russia.

"I think all consumers will agree that this cheap pork at retail was not the last years", — says Kovalev. In addition, the prices of chicken, beef and fish have a tendency to decrease. Thus at the end of the year, the cost of pork will increase by 10% due to the devaluation of the ruble and pandemics. In conjunction with the decline in prices that could further deteriorate the financial situation of producers.

All the projections say that active development of the pig industry will continue for the next four years. According to Kovalev, the top 20 pork producers, who account for 70% of the market, plan for 2020-2024 years to increase output by 47%. "This is the most effective, qualified companies that can't make rash decisions," he adds, clarifying that the production increase to 1 million tonnes (carcass weight) for four years will not be superfluous. 300-350 thousand tons from this amount will increase consumption because of lower prices. 200 thousand t need to compensate for the shortfall in production volumes of companies that go bankrupt, 150 thousand tons will cover the decrease in output in the individual farms, 50 kt, the reduction of import over 100 million tonnes, another 350 thousand tons will be exported.

This year will be the first in 30 years, when Russia almost did not import pork, emphasizes Kovalev. Thus, according to the NSS, for the first six months of this year the imports amounted to only 1 million tonnes, which is 60 thousand tons less than the year before. According to Kovalev, the introduction of a 25% duty on the import of pork, of course, reduced imports, but the main factor is the growth of domestic production and strong competition among domestic players.