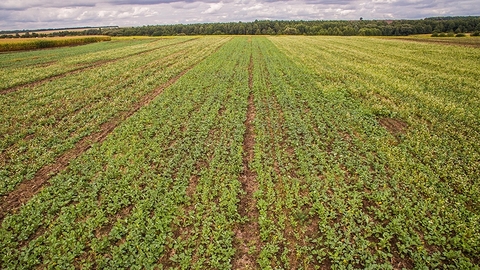 It is also noted that the current warm, mainly without precipitation, the weather contributes to the forage and grain ripening corn.

"In the squares, which remains a good hydration of the upper layer of the soil, the favourable agrometeorological conditions for sowing of winter crops, germination and further development of plants.

According to the results of instrumental determination of moisture content in the arable layer of soil under winter grain crops and winter rape, as well as on the fields intended for winter crops, in much of the country's moisture reserves remain adequate," - said in the message.

At the same time, adverse agrometeorological situation for winter crops is emerging in many parts of southern and South-Eastern part and also in some Central and Northern regions of the Republic where the top 10-cm layer of the soil is poorly hydrated, and in some places in Homel and Brest in the West of the region is dry. This complicates the conduct of agrotechnical measures for the cultivation of the soil, the germination and emergence of winter crops. In large areas of Gomel, in some areas of Brest, on light soils in the southern part of Grodno, Minsk and Mogilev regions due to the shortage of rainfall moisture reserves in the arable horizon was reduced to satisfactory in some areas, to low.

"In the second decade of September expect rain on most of the territory of the Republic shall moisten the soil. The conditions for harvesting from mid September to deteriorate," predicts agrometeorology.