Monday, 15 July 2019
Italian locusts devour a field of soybeans in the South of Russia
Italian locusts devours a field of soybeans and corn in Kabardino-Balkaria. The spread of the voracious pest contribute to the heat and lack of rain. To save at least part of the crop, planting is treated with several types of chemicals. The correspondent of TV channel "MIR 24" Marina Sasikova saw. 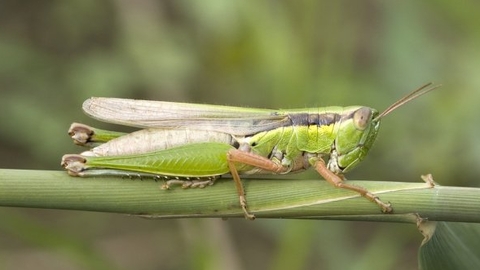 CIT, one of the most voracious species of locust. Eating even at night. Destroy plants, along with their stems, leaving only empty lots.

The locusts have arrived here at all from the Sunny Italy, experts say. She has long chosen local spaces.

"We had a snowless winter, and she is bred. Huge damage! Due to the fact that it worked very quickly, besides processed twice, soybeans at least injured, but survived," – says the agronomist on protection of plants Anna Kolesnikova.

Fields are treated simultaneously, the two strongest pesticides. Go there can be neither people nor domestic animals for three days – you can get serious poisoning. Another way to deal with the locusts impossible.

Insects wingspan can be compared to the Sparrow. Can eat two to three times more than its own weight. For example, a field of hundreds of hectares destroyed in just a couple of hours.

"There are critical situation. At high solar temperatures comes suleimanie. Gather in flocks and can cause very serious damage to agriculture," – said the agronomist on protection of plants Olga Bugaeva.

CIT at the end of June fell from the two districts in the Rostov region. Experts predict the migration of adult individuals and in other regions of the country. The insect can fly several hundred kilometers.

The locust is interesting because it can exist either alone or in the pack. It depends on the amount of food. When food is sufficient for growth and development of the population, the insect leads an inactive lifestyle. If food becomes scarce, the locust lays the so-called "camp" offspring. Displayed specimens are considerably larger in size with long wings. Such locusts gathers in huge flocks of up to hundreds of millions of insects.